U.S. Embassy in Baghdad warns President Trump against betraying Iraqi allies in the fight against the Islamic State. 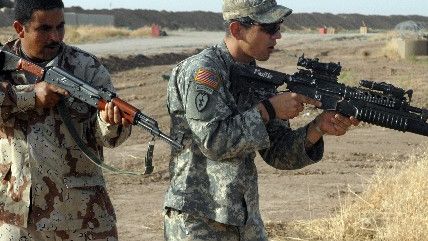 President Trump's sweeping ban on travelers from seven majority Muslim countries (including Iraq) from entering the United States was intended to protect the homeland from a vanishingly small threat of terrorism. But U.S. diplomats stationed on the front lines in the battle against arguably the world's most notoriously violent and sadistic group of Islamist extremists—ISIS—say the president's plan is both morally and strategically misguided.

According to a memo sent by the U.S. Embassy in Baghdad to the State Department, the travel ban risks the U.S. losing critical support from the Iraqi government, military, and the militias which the U.S. continues to support as they collectively try to retake territory occupied by ISIS for the past three years. The Wall Street Journal reports the memo reveals the diplomats in Baghdad were "blindsided" by Trump's executive order and are worried that the fallout could irreparably damage relations between the two countries, which are nominally "close allies."

The memo cited examples of unforeseen consequences of Trump's order, including an Iraqi army general who has worked closely with U.S. forces now being unable to visit his family in the U.S., a scheduled meeting in the U.S. between Iraqi officials and General Electric over a multi-billion-dollar energy investment now may not take place, and perhaps most crucially, the fate of approximately 60,000 Iraqis who risked their lives to aid the U.S. in Iraq now hangs in the balance. These Iraqis had applied for Special Immigrant Visas and if they were to be abandoned by the U.S., securing the cooperation of the locals in any U.S. military theater could be imperiled, but especially in Iraq, which has been war-torn since the U.S.-led war to depose Saddam Hussein began in 2003.

Iraqi officials have already called for reciprocity in the form of banning U.S. citizens from entering Iraq, and a spokesman for The Popular Mobilization Forces, a coalition of Iranian-backed Shiite militias fighting the Sunni extremists of ISIS said Trump's action insulted "the dignity of Iraqis who have suffered thousands of martyrs fighting terrorism on the behalf of the world," according to the Journal.

President Trump campaigned on being "the toughest guy" when it came to projecting U.S. military strength around the world, but his clumsy and cruel edict is a threat to U.S. military interests at a crucial time in Iraq, where ISIS loses more territory by the day, but where "winning the peace" has always been the unattainable victory for almost a decade-and-a-half.