Is Trump's #MuslimBan a Muslim Ban?

Not exactly, but it overwhelmingly affects Muslims and gives preference to Christian refugees. 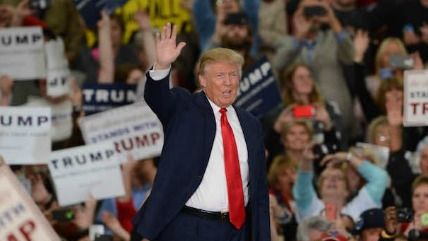 President Trump says Twitter is wrong about the executive order he signed on Friday. "This is not a Muslim ban, as the media is falsely reporting," he said in a statement yesterday. "This is not about religion—this is about terror and keeping our country safe." Trump is right in the sense that his order does not ban all Muslim visitors, as he suggested during his presidential campaign. The order nevertheless will mainly affect Muslims.

The seven countries covered by Trump's 90-day ban on visitors—Iran, Iraq, Libya, Somalia, Sudan, Syria, and Yemen—all have overwhelmingly Muslim majorities, ranging from 90 percent (Syria) to nearly 100 percent (Somalia). The people covered by Trump's 120-day ban on refugees (and his reduction in the maximum number of refugees to be accepted this year from 110,000 to 50,000) are more religiously mixed. Muslims accounted for 46 percent of the 85,000 refugees admitted to the U.S. last year. But almost all of the people affected by Trump's indefinite ban on Syrian refugees are Muslims, who accounted for 99 percent of refugees from that country in 2016.

The religious bias of Trump's order is compounded by its preference for refugees who face persecution as members of religious minorities. People who fit that description get a leg up in case-by-case exemptions from the refugee moratorium and in admission after the refugee program resumes. That group would consist mainly of Christians in the case of Muslim-majority countries, although it also might include Muslims from countries such as Burma. As Matt Welch noted on Saturday, Trump himself emphasizes that he is trying to help Christians. Sen. Lamar Alexander (R-Tenn.), who criticized Trump's order yesterday, said it is "not explicitly a religious test" but "comes close to one," which "is inconsistent with our American character."

Still, Trump's #MuslimBan is a far cry from his recommendation following the 2015 terrorist attack in San Bernardino, when he called for "a total and complete shutdown of Muslims entering the United States until our country's representatives can figure out what is going on." Trump reiterated that idea after the deadly attack on a gay nightclub in Orlando last June. But a month later, his "total and complete shutdown of Muslims entering the United States" became a suspension of "immigration from any nation that has been compromised by terrorism until such time as proven vetting mechanisms have been put in place." That language was both narrower, in that it did not cover Muslims from countries not "compromised by terrorism," and broader, in that it covered everyone from countries "compromised by terrorism," regardless of religion. Since it was not clear what "compromised by terrorism" meant, it was anybody's guess whether the net effect was to decrease or increase the number of people affected.

In a July 24 interview on Meet the Press, Trump presented the switch as if it were more rhetorical than real:

I actually don't think it's a rollback. In fact, you could say it's an expansion. I'm looking now at territories. People were so upset when I used the word Muslim. "Oh, you can't use the word Muslim!" Remember this. And I'm OK with that, because I'm talking territory instead of Muslim.

Given his own admission that he wanted to achieve his Muslim ban by a different name, Trump's critics can perhaps be forgiven for concluding that is what he is doing now. But compared to the ban he was urging a year ago, his executive order is both overinclusive (since half of the refugees it covers are not Muslims) and underinclusive (since it does not cover Muslims who are not refugees and do not come from any of the seven specified countries).

The ACLU nevertheless thinks the order can be challenged as a violation of the First Amendment's Establishment Clause. "The smoking gun they put in the executive order is the idea that they would grant exceptions for minority religions," ACLU Executive Director Anthony Romero told The New York Times. "The one thing you can't do under the Establishment Clause is denomination favoritism. That's a very promising claim, but it requires the right plaintiff."

Addendum: Trump adviser Rudy Giuliani says the president's order was a way of reframing the Muslim ban to make it less controversial. "When he first announced it," Giuliani told Jeanine Pirro on Fox News, "he said 'Muslim ban.' He called me up, he said, 'Put a commission together. Show me the right way to do it legally.'…What we did was we focused on, instead of religion, danger: the areas of the world that create danger for us. Which is a factual basis, not a religious basis." Except that the seven countries on Trump's list do not actually correspond to the nationalities of people who have carried out terrorist attacks in the United States since 2001.