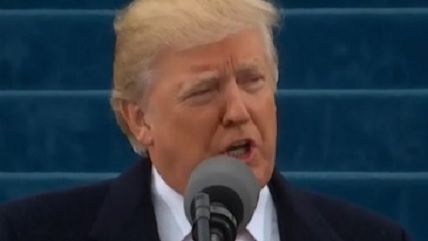 Stripped of its Trumpian bombast and interpreted sympathetically, our new president's grand foreign policy promise is that he will prioritize vital U.S. national interests in his calculations of war and peace. As Trump might say it, he will negotiate the best deals, make America great, put America first—or, in a more traditional foreign affairs vocabulary, he will not risk U.S. blood and treasure for anything but national defense, narrowly defined.

At least, that's what it ought to mean. And if there is any chance of hope becoming fact, President Trump's first task now is to develop a firm conception of exactly what vital U.S. interests do—and, perhaps even more important, do not—entail. If the last 15 years of nonstop, bipartisan war-making have demonstrated anything beyond contestation, it is that a messy understanding of national interests is a surefire path to reckless and often counterproductive military interventions that do not contribute to our defense or achieve their stated goals.

Though illustrations of this point abound, the most obvious in President Obama's tenure was his 2011 NATO intervention in Libya. "No one even tried to pretend that U.S. interests were at stake in the Libyan war," notes The American Conservative's Daniel Larison, "and yet Obama committed the U.S. to an avoidable war anyway." Six years on, Libya remains in chaos thanks in significant part to the American-facilitated power vacuum into which the Islamic State (ISIS) has surged. So far from defending the United States in any meaningful sense, the Libyan misadventure has only created new risks.

As for humanitarian relief, the intervention's ostensible aim, there too the picture is grim. Credible evidence out of Harvard indicates "NATO's action magnified the conflict's duration about sixfold and its death toll at least sevenfold, while also exacerbating human rights abuses, humanitarian suffering, Islamic radicalism, and weapons proliferation in Libya and its neighbors." There was never a persuasive case for how intervening in Libya could protect American interests—unsurprising, as none were at stake—but it is tragically obvious how the Obama administration's unwarranted involvement furthered the misery of the Libyan people.

A sadly similar lesson may be learned at least in Iraq, Syria, and Yemen—if not Afghanistan, Pakistan, and Somalia—but as the Trump team settles into its new Washington digs, it may be that the next place Trump must apply this lesson is Iran. Trump himself has spoken of renegotiating the Iran nuclear deal (properly, the Joint Comprehensive Plan of Action), but has yet to specify how he would like it to change. Still, where he talks of diplomacy, albeit antagonistically, too many other voices in the foreign policy establishment have more bellicose ideas.

Writing at Time on Thursday, for example, Jeb Bush and co-author Dennis Ross argued Trump must "isolate Iran immediately." Bush says Trump must "establish unmistakable red lines," provide "new and more robust authority to the U.S. Navy to respond to Iranian provocations," and treat as "unacceptable" Iranian action in Baghdad and Damascus. Though the piece ends with an insistence that "tougher policies now are likely to reduce the risk of escalated conflict later," that is a laughable conclusion to what is blatantly a call for immediate escalation unsupported by any convincing case that it would serve our vital interests.

Trump's campaign trail beefs with Bush may keep him from taking this advice, but within the president's own camp, National Security Advisor Michael Flynn has pushed a similarly hawkish approach to Iran, even making unfounded accusations of Iranian sponsorship of the Benghazi attack despite the very unlikely Sunni-Shiite cooperation that would entail. In short, a reckless and avoidable war with Iran is not unthinkable—unless Trump develops a firm category of the key interests whose defense should be the sole province of his foreign policy.

After the trouncing of the Taliban in Afghanistan in 2002, writes Ret. Col. Andrew Bacevich in his military history, America's War for the Greater Middle East, "a protracted war ensued, waged in a country where the United States was without vital interests, against an adversary that, however repellent, did not directly threaten U.S. security." And rather than learning from past foreign policy mistakes, he adds, our recent presidents, when "[f]aced with some grave injustice or large-scale violation of human rights … found it increasingly hard to justify [military] inaction" as a "new sentiment emerged: America Everywhere, open to sending the troops wherever people were in dire straits."

It is that sentiment Trump must overcome—in theory an easy project given his own campaign critiques of Barack Obama and former Secretary of State Hillary Clinton, the Libya debacle's chief cheerleader. In practice, with the foreign policy establishment refusing to learn from its own missteps, it's a hefty undertaking indeed.