Disasters Should Be Dull

But as long as distant authorities are in charge, that's impossible.

Stefanie Haeffele-Balch and Daniel Rothschild | From the February 2017 issue 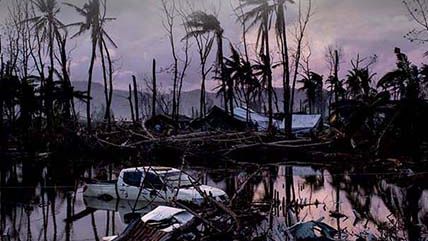 Dull Disasters? How Planning Ahead Will Make a Difference, by Daniel J. Clarke and Stefan Dercon, Oxford University Press, 160 pages, $22.95

As you might expect of a volume with the word dull in the title, Dull Disasters? is not a sexy book. The authors, Daniel J. Clarke and Stefan Dercon, are an actuary and an economics professor, respectively. Their thesis is that with better planning and coordination, natural and humanitarian disasters can become less exciting TV viewing and more, well, dull. In a good way.

Therein lies the tension in Clarke and Dercon's book, and in disaster policy more broadly. They assume that centralizing the planning process is both efficient and possible. Yet many of their examples show people's ingenuity in devising systems tailored to their own needs. Rather than centralizing these examples into one-size-fits-all programs, we should appreciate the flexibility and uniqueness of local solutions.

The heart of Clarke and Dercon's argument is a critique of the "begging bowl"—their term for the system by which government agencies and nongovernmental organizations (NGOs) beg for taxpayer and private dollars after a disaster. This "medieval" approach, they argue, is "too slow" and "leads to a fragmented response."

They have a point. Waiting until a disaster strikes to gather funding and craft an overarching plan means that valuable time is spent pandering for cash rather than rebuilding. As they write, "The way forward is to act before disasters strike, preparing credible plans with rules-based decision-making and early action and held together with sound financial planning agreed beforehand." After a disaster, the relevant policy question should be how rules will be enforced, not what kind of new rules will be put in place.

Agencies and NGOs already plan, of course. But once disasters strike, they tend to cast these plans aside, introducing uncertainty and causing delays. As Clarke and Dercon write, politicians "prefer discretion over rules."

The results are uninspiring. After Hurricane Katrina, for example, Congress appropriated over $100 billion for disaster recovery. If it had bundled the cash into helicopters and dropped it over major population centers, the results might well have been superior to what we saw. Consider Louisiana's dysfunctional Road Home Program. Funds weren't acquired until August 2006, roughly a year after the storm. In July 2007, only about 25 percent of that money had found its way to homeowners, who found themselves in a Byzantine application process that took years to resolve. It wasn't until 2013 that the program got the majority of the dollars out the door.

As the authors note, this is partly a problem of incentives. "Why should a politician invest in a sensible system to reduce risks and enable a quick response to a strong earthquake if the political benefits from such a system are likely to be reaped by that politician's political successor?" they ask. It's a good question, but one that the book leaves largely unanswered.

Instead, it focuses on the patchwork, overlapping, and ad hoc systems (another word might be polycentric) for preparing for and responding to disasters. Such systems, they complain, are limited in scale and lead to redundancies; centralized systems, they suggest, could as effectively serve a larger population.

They argue that centralization can be effectuated through insurance. Clarke and Dercon's chief interest is securing funding to respond to disasters before they occur so that funds can be distributed quickly afterward. That way, they say, time and energy wasted on rattling the begging bowl can be reallocated to humanitarian needs.

Insurance is no doubt important to rebuilding after disasters. But it's no panacea.

In the U.S., there's a division between homeowners insurance that covers hazards (left to markets that are, depending on the state, somewhat to quite robust) and flood insurance (virtually only available through the National Flood Insurance Program). After Hurricane Katrina, some Louisianans were left without funds to begin rebuilding for months as their (private) homeowners insurers and (semi-public) flood insurers debated whether water damage had come from the ground or from the sky. Each insurance provider had an incentive to push the costs of rebuilding onto the other, which only prolonged people's suffering.

Clarke and Dercon also blur the line between voluntary insurance schemes and programs run by the public sector. They cite the mutual aid and burial insurance associations of India, Bangladesh, and Ethiopia as praiseworthy examples of how local knowledge and relatively simple insurance mechanisms can ameliorate negative shocks. These groups do offer critical services, such as the resources needed to follow traditional burial rituals, to individuals who understand the importance of planning ahead. But what is laudable in these systems does not necessarily transfer to international schemes involving dozens of governments, hundreds or thousands of NGOs, and potentially millions of people. Centralizing such systems could ruin everything that is good about them: their flexibility, customization, and effective mechanisms for monitoring participants and enforcing the rules.

Herein lies the central flaw in the authors' thesis. "It is far, far better to have one well-coordinated plan than a number of fragmented plans," they assert. Why? Because of "economies of scale in financing and logistics."

But consider those burial associations. Hundreds if not thousands of them exist around the world. If they are praiseworthy, why not run them as obligatory nationalized insurance schemes? For one, expanding mutual aid from a community into a savings system for the whole nation alters the nature of the beast: Incentives change dramatically, and local knowledge is set aside. Also, it's one thing to have enough funds on hand to quickly help a grieving mother bury her child. It's another to quickly disburse funds to rebuild a major city.

The model also doesn't translate to disaster preparedness, as uncorrelated risks within a given population are different than risks that befall large areas and groups. The social bureaucracies of wealthy western countries have been capable of paying death benefits for decades. Death is clearly defined in law and triggers a rules-based sequence of events, culminating (in the U.S.) with a widow or widower receiving $255 from the Social Security Administration. Compare that with the complicated task of figuring out who has been affected and the extent of their losses after a disaster. As the failures of Katrina recovery highlight, public bureaucracies are severely limited in their ability to manage this task.

After a disaster, people are often cut off from one another. Roads and infrastructure may be damaged; power and communication systems may be down. People are separated from their loved ones, unable to go to work, uncertain about what comes next. The situation on the ground is constantly changing, requiring everyone to adjust their plans quickly and frequently. Information is hard to acquire and act upon, making it more difficult to adapt. How then do people tackle the challenging task of getting their lives back to normal?

Research conducted by us and others—including hundreds of interviews after Hurricanes Katrina and Sandy—shows how commercial, social, and political entrepreneurs drive community recovery.

After Hurricane Sandy, residents of Rockaway in Queens were without power for two weeks. Before government agencies could arrive, the area's Orthodox Jewish community sprang into action. Synagogues became depots for hot food, dry clothes, and charged cellphones, and a local crisis center that specializes in medical emergencies helped reinvigorate a fund first developed to help community members after the 2008 financial crisis.

The group raised over $3 million and disbursed the funds quickly to those in need, using the maligned begging-bowl approach. Rabbis who knew the community screened aid applications; lawyers and accountants volunteered their time to help negotiate private and public bureaucracies. Like the developing-world mutual aid systems praised in Dull Disasters?, this system worked precisely because it was small and flexible.

Officials should ask how they can facilitate such bottom-up systems. Imagine, say, a state law that creates professional licensing reciprocity in the immediate aftermath of a natural disaster, so that out-of-state contractors, plumbers, electricians, doctors, nurses, and other specialists can legally practice their trades in the affected area. Suspending such requirements would do wonders to speed recovery and reduce uncertainty.

Making disasters dull is an admirable goal, but it requires acknowledging the limits of public policy and the power of dispersed knowledge. More planning, yes. More central planning, no.

Stefanie Haeffele-Balch is a senior fellow in the F.A. Hayek Program at the Mercatus Center at George Mason University.