Will Trump Really Bring Back CIA 'Black Sites'? Even If He Wants To, He Might Not Need To

The Trump administration can always outsource its dirty work to allies. 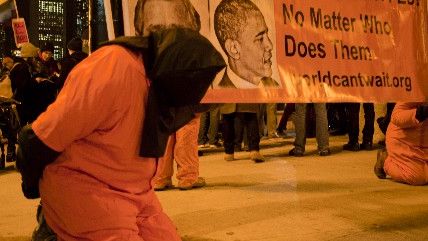 A day after the leaking of a draft executive order—which appeared to indicate the Trump administration's intention to return to some of the most controversial and legally questionable George W. Bush-era tactics for interrogating detainees—all that's clear is there is significant confusion within the ranks of the White House over the order itself.

White House Press Secretary Sean Spicer said that the document obtained by The New York Times and Associated Press did not originate from the administration, but three other administration officials contradicted Spicer's assertion. According to the Times, those officials "said the White House had circulated the draft order among national security staff members in the same way that a flurry of other pending executive orders had been distributed for review: with no warning and scant time to provide comments."

One of the officials said an email chain showed that at 8:41 a.m. on Jan. 24, a clerk had sent the draft order as an attachment to several National Security Council policy staff members, who forwarded it to others. The clerk works on the administrative staff of retired Lt. Gen. Keith Kellogg, the chief of staff and executive secretary of the National Security Council.

The subject line referred to the memo as Package 0048. Addressed to the council's legal, counterterrorism and defense units, the email said: "Please review the attached draft EO. Comment/concurrence due by 10 A.M. Thank you." Neither the email nor the draft order said who, or which office, had drafted the order.

The typo-riddled document was clearly never intended to be made public, and as Buzzfeed reported, it was essentially the exact same draft order Mitt Romney's campaign had created as part of the 2012 Republican presidential nomineee's plan for his first 100 days in office—only the Trump administration version excised some language and changed some verbiage, such as crossing out the word "jihadist" and replacing it with "radical Islamist."

President Trump campaigned on bringing back harsh interrogation tactics and dismissed any concerns that things like waterboarding, forced nudity, solitary confinement in small boxes, and exposure to extreme temperatures constituted torture. However, his Secretary of Defense James Mattis has vocally opposed such tactics, and for a time at least, seemed to have convinced Trump that there were more effective methods of securing a detainee's cooperation.

In an interview with ABC News last night, the president said he would defer to Mattis and CIA Director Mike Pompeo (who said during his confirmation hearings that he would would refuse to comply with a presidential order to violate current law and re-instate "enhanced interrogation" techniques). But, Trump says of torture, "I want to do everything within the bounds of what you're allowed to do legally. But do I feel it works? Absolutely, I feel it works."

Eli Lake raises an interesting point in a column for Bloomberg: Trump doesn't need to re-instate the practice of secret CIA prisons in foreign countries because "extraordinary rendition"—where harsh interrogations are outsourced to foreign countries on behalf of U.S. intelligence—has never gone away.

Lake writes that Presidents Clinton, Bush, and Obama all relied on extraordinary rendition to various degrees, and although Obama ended the CIA black sites and forbade torture, he still had prisoners interrogated in "third-world prisons," and sometimes those prisoners were beaten and kept in squalid conditions. Lake adds:

Those partnerships will likely be the reason that Trump, despite his bluster, will not revive the CIA's black sites program. He simply doesn't need to. In a narrow sense, this will be a victory for human rights and the rule of law. But given the history of America's third-world allies in the war on terror, that victory is pyrrhic.

Trump hasn't even been in office a week and yet his administration is awash with leaks and confusion. The draft order in question here is certainly newsworthy and disturbing, but given the fact that secret renditions continued even under the more international law-respecting President Obama, the U.S.'s indirect involvement in abuse of detainees might see an uptick under Trump, even without black sites.