Don't Look Now, But Your Government Is Leaking

As Trump takes over, it won't get any easier to keep a lid on leakers. 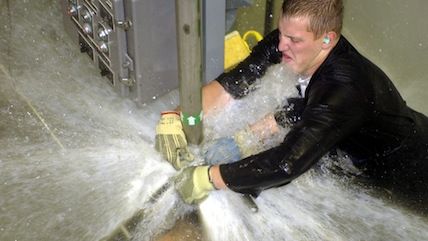 The leaks have been a flood in Washington this week. Vox has published the drafts of what appear to four pending White House executive orders. Other leaked documents floating around range from a draft list of infrastructure projects to an "agency action" plan for the EPA. The New York Times has revealed a proposal to lift the ban on Black Site prisons, though the provenance of that one isn't completely clear. And a rather large number of Donald Trump's senior aides have been telling reporters unflattering anecdotes about the boss.

Meanwhile, press outlets from The Washington Post to ProPublica to The Intercept have published how-to-leak-to-us guides. (The Intercept's post is headlined "Attention Federal Employees: If You See Something, Leak Something.") Wikileaks, naturally, has been tweeting reminders that its doors are open.

So I agree with my colleague Ron Bailey when he suggests that Trump could "succeed brilliantly in making government leaks great again." But let's be clear: We were on that track already. Trump is just accelerating the train.

Back in 2010, Bruce Schneier wrote that "the government is learning what the music and movie industries were forced to learn years ago: it's easy to copy and distribute digital files." People can get so focused on an individual leak—or a venue for leaks, in Wikileaks' case—that they miss that bigger picture. It is easier than ever to make information public. In the age of social media, you don't even necessarily require a reporter as an intermediary, though it helps. The risks remain real, as Chelsea Manning could tell you, but the cautious whistleblower can reveal a lot without getting caught.

The news consumer still needs to distinguish real material from disinformation, to sift good analysis from spin, to remember the difference between a draft and a settled plan, and to be on the lookout for a source's agenda. (A leaker with a dicey agenda can still reveal legitimate information, of course. Mark "Deep Throat" Felt fed facts about Watergate to The Washington Post for utterly self-interested reasons, but the information was still illuminating.) In other words, we don't just need leaks to be well-informed. We need basic media literacy.

But that's always been the case. It's just that now we'll have a lot more places to apply those media literacy skills.