What DeVos Should Have Said

Donald Trump's education secretary nominee is being considered by the Senate. 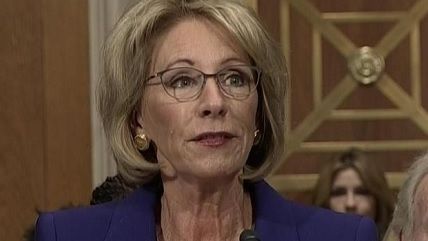 Donald Trump's nominee for secretary of education, Betsy DeVos, probably survived the grilling she got from angry Democrats last week.

When Sen. Patty Murray (D-Wash.) demanded she promise not "to privatize public schools," DeVos replied, "Not all schools are working for the students."

Those answers were fine. I suppose it's important for a nominee to be polite.

But what I wish she'd said was: "No, Sen. Murray, I won't promise not to privatize! Didn't you notice the mess government schemes create? Many government-run schools are lousy! Private is better!"

"Sen. Sanders, how clueless can you be? Your 'free' stuff is already bankrupting America! Your 'free' health care plan was rejected by your own state—once your fellow Democrats did the math. Then your wife bankrupted Burlington College! You call yourself 'socialist!' Haven't you noticed that socialism wrecks people's lives? You should resign in shame!"

Sen. Elizabeth Warren (D-Mass.) demanded DeVos explain what she will do about schools like Donald Trump's "fake university… I am curious how the Trump administration would protect against waste, fraud and abuse at similar for-profit colleges."

DeVos tried, "If confirmed, I will certainly be very vigilant…"

"How?" interrupted Warren, who went on to sneer, "You're going to give that to someone else to do?"

Warren's attack was absurd because Trump University was not an actual college that received federal funding. As the Cato Institute's Neal McCluskey points out, "Of course it wasn't, and the education secretary did not have jurisdiction over it."

What DeVos should have said: "I would do nothing about Trump University, you smearmonger! Trump U has nothing to do with schools that get federal money. Do you conflate the two just to make profit the villain?"

Sen. Al Franken (D-Minn.) asked DeVos whether students' learning should be assessed based on "proficiency or growth." Proficiency means a third-grader masters third-grade-level work. Growth means improvement—that's fairer to disadvantaged students, who start from behind. DeVos began, "I would … correlate it to competency and mastery…"

DeVos should have said: "Senator, neither measure is fair to teachers or kids! The proficiency vs. growth argument is a by-product of your stupid No Child Left Behind law. Such federal micromanagement is terrible because every kid is different. That's why your opposition to choice is destructive. Of course, you don't even know how bad many government-run schools are. You sent your kids to a private school that charges $44,000 tuition. Get real, Al!"

Sen. Chris Murphy (D-Ct.) demanded that DeVos support a ban on guns in schools. DeVos replied, "That is best left to locales and states."

Murphy was incredulous. "You can't say definitively, today, that guns shouldn't be in schools?!"

Earlier at the hearing, Sen. Mike Enzi (R-Wy.) mentioned a Wyoming school that has "a grizzly bear fence." So DeVos joked that there was "probably a gun in the school to protect from potential grizzlies."

The New York Times called that comment an "internet punchline." GQ called DeVos "Horribly Embarrassing in Every Way" and, oversimplifying the issue, said that "she thinks guns belong in schools because of … grizzlies."

What DeVos should have said: "Senator! Have you no understanding of federalism? You think Washington, or you, know what's best for all schools in America? As education secretary, I don't have the power to ban guns. No federal official does! Read the Constitution, you ignorant control freak!"

OK. This is fantasy. No nominee can be that rude to politicians who have power over her.