If Trump Is Going To Start Deporting Immigrants Who Broke the Law, Will He Start with Melania?

A lot of evidence suggests the First Lady broke the law in her early days in the United States. Which is an argument to CHANGE THE LAWS. 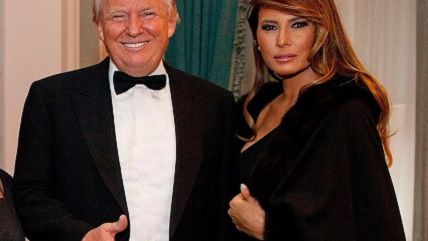 For me, the single most repellent element of Donald Trump's legislative agenda involves immigration policy. His protectionist trade policy is awful and will beggar us as a nation, but to demonize the "wretched refuse" of the world that comes to America "yearning to be free" goes beyond mere stupidity. Illegals commit fewer crimes than natives and make America greater by paying taxes and by lowering prices and doing jobs Americans won't do. As Ronald Reagan, who legalized millions with the stroke of a pen in the late 1980s, could tell you, their legal status is arbitrary, too. If your only crime is to "break into" America because you want a better life for yourself or your kids, I refuse to call you a criminal. Like a lot of Americans, I'm more likely to call you Grandma or Grandpa.

As Shikha Dalmia reports, today Trump will announce plans to start building, rebuilding, and expanding a wall along the United States' southern border. If the past is any indication, it will be massively expensive and totally useless, and not simply because 40 percent or more of illegals come here legally and fewer and fewer migrants in general are coming from down Mexico way. It's because governments don't ultimately control migration flows any more than they control the flow of illegal drugs. Prohibition, whether in liquor, pot, or people can cause a huge amount of damage and bring violence, but it ultimately doesn't work, except for brief periods of time in totalitarian circumstances.

FFS, if you can still can get every illegal drug known to man in supermax prisons, how the hell do you think you're going to keep out poor people motivated to leave behind a rotten situation in a third-world country? The short answer is: You can't. Especially with a fence along 2,000 miles of desert. If the American economy is strong, people will come whether they can enter the country legally or not. If the economy is soft, especially when an immigrant's home-country economy is OK, they will stop coming. Which is exactly why Mexicans stopped coming to the United States eight or more years ago. The only proven deterrents to immigrants, legal or illegal, is a shit economy, global depression, or world war. None of those are preferable to having to hit a button indicating what language your prefer at your local ATM.

But if President Trump is in fact dead-set on deporting and boxing out ilegal immigrants, he should consider first the case of his third wife, Melania. Back in November, the AP reported that it discovered documents which

show she was paid for 10 modeling assignments between Sept. 10 and Oct. 15, during a time when her visa allowed her generally to be in the U.S. and look for work but not perform paid work in the country. The documents examined by the AP indicate that the modeling assignments would have been outside the bounds of her visa.

In other words—words that anti-immigrant activists constantly invoke—she broke the law and thus should be bounced from ever being able to become an American (she became a citizen in 2006). What part of illegal doesn't she understand? Questions remain about the conditions under which she received her first green card in 2001, but if she lied at any point during her immigration process, she could theoretically be booted out of the country.

I raise this not to paint the former Melania Knaus as some sort of criminal or her husband as a hypocrite but simply to humanize other immigrants. One of the major problems with the reactionary nature of the media today and many Trump opponents is that they are blinded by rage and just want to score cheap points to diminish the billionaire. That type of response gets in the way of serious, substantive policy discussions that are about more than whether the Democrats will pick up a seat in the Senate or be able to humiliate Ben Carson during confirmation hearing. Public policy and politics are ultimately is about flesh-and-blood people and when it comes to subjects such as drug policy, school choice, and immigration, we should never be overly concerned with tribal allegiance or making an elected official or public figure look like a POS. We should focus on the lives helped or hurt.

So why did the first lady want to come to America from her native Slovenia? She's quite eloquent on the topic:

"I wanted to follow my dream to a place where freedom and opportunity were in abundance. So of course, I came here," she said. "Living and working in America was a true blessing, but I wanted something more. I wanted to be an American."

The United States government has every right to reject immigrants who have criminal records, or who have communicable diseases or otherwise present serious public health concerns. Yes, immigrants should not be eligible for means-tested welfare benefits (they haven't been for decades now). Yes, they should pay full taxes (most illegals already pay large amounts of income and FICA taxes, which they will never collect in the form of Social Security or Medicare benefits). Beyond that, the best way forward—from a moral position as well as an economic one and a cultural one, too—is to let them all in. Contrary to restrictionists, not everyone in the world will move here. Migration flows are pretty self-regulating actually, but it's actually pretty tough to grow an economy when population is flat or declining (go ask Japan about that). Virtually all of the problems associated with illegal immigration stem not from the immigration part but from the illegal part, just like most of the problems associated with illegal drugs stem from prohibition, not the substances themselves.

Donald Trump wants to Make America Great Again, but his vision of our country is stuck in 1970s New York, a time when his city was ravaged by crime and bankruptcy and, not uncoincidentally, the percentage of the population that was foreign-born was near a historic low. His Great America was one in which the masses yearning to be free were either stuck behind Iron and Bamboo Curtains or were busy making coin in post-war Europe and Asia. Nobody, least of all relatively poor people who are still magnificent enough to think of America as the Land of Opportunity, should have to pay the freight for his dark nostalgia.