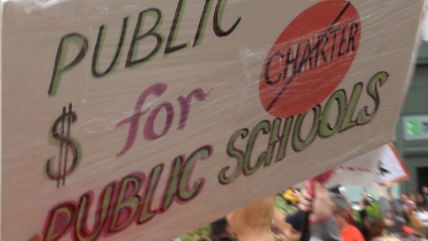 secretary of education last week. But in fact they only exposed themselves. They used her as a prop to grandstand about every ideological hobbyhorse of theirs – some such as gun control that didn't even have anything to do with education – rather than actually engage a worthy intellectual opponent on the merits of her case, I note in my column at The Week this morning.

But regardless of how much they foam at the mouth, they oppose school choice at their peril. The National School Choice week that Reason sponsors has grown by leaps and bounds over the last seven years with more folks disenchanted with the public school monopoly joining every year.

Indeed, as my colleague Ed Krayewski pointed out this morning, 65 percent of Americans now support charter schools, which, mind you, is a relatively moderate and practical reform to extricate kids caught in failing public school classrooms and make teachers' unions accountable to parents. But Dems couldn't stop sneering even at that during the hearing showing just how out of touch they are with real Americans.

They will have to descend from their moral high ground in the stratosphere and connect with the trials and tribulations of living, breathing humans if they are going to stop the many rights abuses that are almost certainly coming in the Trump administration.

Save people, not ideology. A good place to begin will be by stop lecturing their intellectual opponents and start listening. And there is no better time to begin than the National School Choice Week. What do ya say, libs?