Thanks for helping make the case for school choice, Marc Levine! 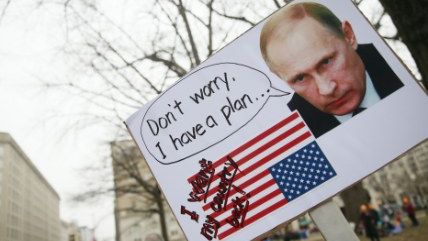 Need a lesson on why parents are increasingly looking for ways to get their kids out of the public school system? Check out this Democratic California legislator who wants to use public schooling to explain to children what really happened with the 2016 election.

Assemblymember Marc Levine (D-Marin County) announced "a bill that will require the State Board of Education to develop curriculum to educate California students about Russian interference in the 2016 Presidential Election."

"The work of 17 intelligence agencies including the FBI and CIA confirmed Russian interference in our election. This is a threat to our democracy and must be treated with appropriate significance in American history," Levine said. "California is the largest textbook market in the nation. Textbooks approved in our state are used throughout the country. Through this legislation, we can make sure students in California and across the United States receive accurate information about the 2016 Presidential election."

So, where to begin?

The investigation is still literally happening right now. The extent of communication between the Russian government and Donald Trump's campaign isn't even fully known. Intelligence agencies are looking over intercepted communications, and the idea that we as a public even know enough to "teach" this right now is absurd. Yes, it will probably be some time before the schools and textbooks were able to implement this policy, but even so, let's be suspicious that there will be enough to teach any of this as fact (not that Levine cares).

Millions of Americans (even in California!) voted for Trump. There's been no evidence that Russian interests tampered with the actual voting in any way, shape, or form. The "threat to our democracy" consists primarily of the release of private emails from within the Democratic establishment that made it look bad. We shouldn't downplay the harms that could come from cybersecurity breaches like this, but Levine is blatantly calling for the miseducation of students. And he's deliberately ignoring the evidence that Hillary Clinton lost because she simply didn't get voters on her side and the significant increase in the number of people who didn't vote for president at all.

Using public schools to advance your party's message is creepy. Did Levine think for a moment at all about the potential consequences here or does he just not care? Or does he think they're a good thing? He probably thinks they're a good thing since he believes he can use California's size as leverage to force this into schoolbooks across the country. But of course, when Levine uses school textbooks to advance the Democratic Party's position on the election outcome, this will encourage others to do the same. Another large state like Texas could pass a law forbidding any mention at all. Heck, what would happen if Congress stepped in and tied federal education funding to whatever message about the election the majority and the president approved? In case anybody needed a reminder, the presidency and Congress are under control of the Republican Party.

This isn't why people send their children to school. It's tough to visualize a more compelling example of the problem of political control over the education process than this. Is there a single parent out there actually hoping that public schools remove something out of the political science or history curriculum in order to replace it with this? I mean we already have a generation of young adults with little grasp of the First Amendment (we're apparently having a Twitter debate over whether it's okay to punch people for saying terrible things).

Parents send their children to school with the understanding that education is meant to provide their kids with the tools to make their way in the world, not to help the political parties draft future members.

Levine's proposal is a reminder of exactly why school choice is on the rise and popular with parents across the political spectrum. You don't have to be a Trump supporter (and in fact can be a total Trump hater) to recognize the inappropriateness of Levine trying to capture school students to pass his politics along.

Or maybe some parents do like the line Levine's trying to sell their kids. Fine. They can send their kids to schools where people like Levine control the curriculum. Others shouldn't feel like their kids are imprisoned in places where two entrenched political parties are using their offspring as tools to maintain their power bases. That's also what makes school choice great—it's a threat to the ability of politicians to control the types of discussions that children are forced to sit in on. Levine's proposed bill illustrates why that's so important.

National School Choice Week, an annual event promoting the ability of parents and students to have greater options in K-12 education, starts today. Over 21,000 events involving almost 17,000 schools from all 50 states will take place over the coming days. Go here to get more information about events and data about how increasing school choice–charters, vouchers, educational savings accounts, and more–is one of the best ways to improve education for all Americans. As a proud media sponsor of National School Choice Week, Reason will be publishing daily articles, podcasts, videos, interviews, and other coverage exploring the ways in which education is being radically altered and made better by letting more people have more choices when it comes to learning. For a constantly updated list of stories, go to Reason's archive page on "school choice."