The global war on terror never missed a beat. 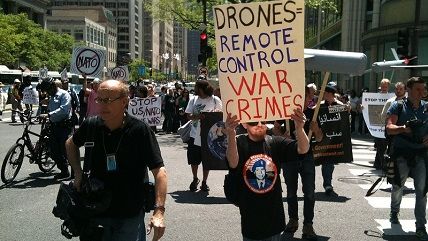 Among its last official acts, the Obama administration released a report on U.S. killings (understood to mostly be drone strikes) outside of "areas of hostility," which mostly just included the government's official estimate of a kill count. It was the first such annual report—Barack Obama did not bother to require it until last summer. Along with a report released over the summer that covered 2009 to 2015, the preliminary final kill count of the Obama administration, which is between 2803 and 3022 alleged "combatants" and between 65 and 117 victims the government identified as "non-combatants." The numbers are far lower than any non-governmental estimates.

But those numbers aren't the final numbers for the Obama administration. The numbers cover the period ending December 31, but the Obama administration lasted another 20 days. A U.S. strike in Yemen on January 9 killed one person, according to the Defense Department, which identified the target as "terrorist leader" Abd al Ghani al Rasas. A second strike on Friday, Donald Trump's first day in the Oval Office, killed three alleged militants, according to the Associated Press, which reported that Yemeni government officials (who often feed U.S. intelligence information on targets) attributed the strikes to the U.S.

The Defense Department has not yet issued a statement on the incident—it waited a day longer, 4 days, to announce the previous incident. Conversely, the Associated Press did not appear to report on the January 9 strike. The tweet about Friday's strike also appears to be the first time the AP tweeted a headline using the term "alleged militant" to describe the victim of a suspected U.S. strike—neither could I find any other articles on the AP's websites using the appropriate term "alleged militants" in headlines about U.S. strikes (stories about foreign actions include the term). The AP is always sure to include alleged or suspected in the text of the articles—none of the targets killed by the U.S. are known to have been first convicted in a court of law. While the Obama administration insisted due process was offered to targets, some of whom the U.S. cannot positively identify, through an in-house process associated with the decision-making mechanisms for a drone strike, such a standard shouldn't be legitimized by neglecting to note targets can only be alleged militants.

The U.S. air campaign in Yemen is not making any friends outside the government (and now the government-in-exile) in Yemen. Before the country collapsed into civil war, in part because of the destabilizing effect of U.S. interventions, Obama pointed to Yemen as a model for U.S. counterterrorism overseas. Instead it has created more anti-American feelings in the country and the region.

"Who do we talk to? America? Where is America?" the AP quoted the survivor of one drone strike who was interviewed for a documentary on drone strikes in Yemen produced by the human rights group Mwatana. That strike, in 2014, occurred in the same province in Yemen as the two strikes this months. "They would kill two or three from al-Qaeda on one hand and 10 or 15 civilians on the other hand. Where is this al-Qaeda they claim to be killing?"

The civil war in Yemen, meanwhile, rages on, with the U.S.-backed Saudi government continuing to bomb the country in an effort to return the deposed government to power. At least 66 people were killed Sunday in coalition airstrikes.