Is there room for a politics that embraces abortion rights, economic rights, civil liberties, free trade, and immigration? Yes, now more than ever. 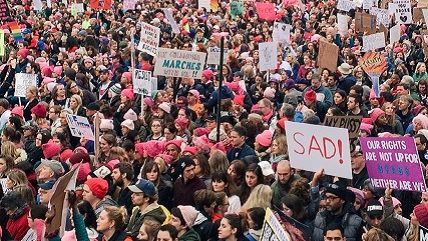 The Women's March in Washington, DC today was massively attended and sprawling in its range of speakers, performers, and attendees. As with many such events, the tent keeps getting bigger until it is so large that no real political agenda is put forward. You can read the organizers' principles here. Whether the march succeeds in "launching a movement" is anybody's guess, but the relative failure of the Tea Party and Occupy Movements to either stick to effective single-issue advocacy (pushing against spending, in the case of the Tea Party) or even persist (Occupy) suggest how hard it is to transform marches into movements. At the very least, though, the size of the march is a visible indicator that the country remains sharply divided politically. Curiously (and despite his "pussy-grabbing" comments that surfaced during the campaign), the focus of ire—Donald Trump—supports paid parental leave and equal pay for women, He also (scandalously for a Republican) has praised Planned Parenthood despite being anti-abortion.

Comments by Ashley Judd, who has made controversial statements about everything from politics to hip-hop (which she once called part of "rape culture"), have been flowing freely on Twitter since she appeared earlier today. She recited a poem written by a 19-year-old Tennessee woman named Nina Donovan and that ended in a full-fury callout against Donald Trump. Along the way, she trafficked in some dodgy stats about pay inequality among women of different races and ethnicities and castigated states that levy sales tax on tampons but not Rogaine (a treatment for baldness). But it's also a pretty great riff about "nasty women" and feminism too.

I suspect that how you react to Judd's comments—she starts out by cutting off filmmaker Michael Moore—will say a lot about how you respond more generally to the demonstration itself. Take a look now:

Between today's march and yesterday's inaugural address, one thing is clear: The two major parties and the ideological positions that they represent are pretty much locked in mutual strangleholds. Despite winning the White House and holding majorities in both houses of Congress, the Republican Party is at odds with broad and mostly growing majorities of Americans when it comes to issues such as immigration, marriage equality, pot legalization, and free trade. Despite claiming to favor smaller government, the last time the party held such control of the federal government, it massively increased spending in all areas, from entitlements to education to defense to welfare. If Republicans govern like that again while working overtime to placate social conservatives, their majority will be short-lived. Democrats have their own obvious problems. Their practical leadership, such as it is, is ancient not simply in chronological terms (Hillary Clinton, Bernie Sanders, Elizabeth Warren are all old) but in policy terms. The Democratic agenda as implemented by Barack Obama in his first two years in office (when the Democrats controlled Congress) was unpopular enough to elect a Republican Congress again. Obamacare is clearly not working as intended and remains genuinely unpopular with people. Decreasing numbers of us trust the government to be competent in controlling more aspects of our personal and work lives, which seems to be all the Democrats talk about. Their ideas are all rehashes from the last gasp of liberalism in the late 1970s, as if even the presidency of Bill Clinton never happened.

In terms of politics, we seem stuck between two false choices that fewer and fewer of us want to make. To riff off a sign I saw during coverage of today's march, we have one tribe that wants the government to control women's uteruses and another one that want the government out of uteruses, except to pay for all health care. The general intellectual incoherence and financial unusustainability of traditional liberal/Democratic and conservative/Republican stances are why party loyalty is sinking on both sides of the aisle. They are enervating to witness but they also create a huge opening for introducing libertarian ideas and policies to a body politic that is exhausted by the struggle between two parties and points of view that have accomplished little more than a massive run-up in debt, prosecuting intractable wars overseas and growing incursions on civil liberties at home, and are both trying to prop an entitlement-state status quo that is morally and fiscally indefensible.

Libertarians, our opportunity is now, with conservatives and Republicans fearing what they have wrought and liberals and Democrats terrified that the swollen state they supported may be directed against them. We have a way forward that will scale down the size, scope, and spending of government while transforming the social safety net into an instrument of support and opportunity. We have an increasing number of examples (the sharing economy, Bitcoin) that permissionless innovation provides the great leaps forward that governments promise but rarely deliver. We can replace fiscally unsustainable entitlements to rich old people with unrestricted cash grants to the poor, we can offer children a choice of schools rather than remanding them to minimum-security prisons based on their parents' ZIP codes. We can insist on taxes being recognized as the revenue necessary to run agreed-upon services provided by the government, not an endless scam designed to ratchet up deficit spending. We can demand to be treated as adults, capable of deciding our preferred intoxicants and medical treatments and speech codes. We need to lay all this out both in broad, inspiring strokes and detailed, serious policy plans.

By a two-to-one margin (60 percent to 30 percent), Americans believe the country is headed in the wrong direction, a dread that was energized by the two main choices for president offered us in 2016—and then double-underlined in a signature-gold Sharpie by the election of the man who becomes president today. A future in which government is disrupted and diminished—and individuals are empowered and enlivened—is possible, but only if we make it happen.