On Entitlements, Elizabeth Warren Says "the Metric is Money"

Should health programs be judged by funding, or by quality of care? 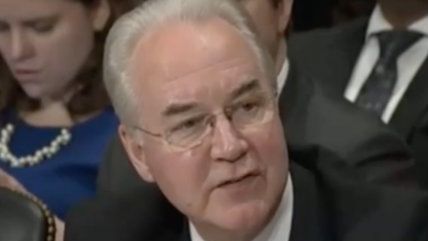 If you want to understand the fundamental divide over how people conceive of America's entitlement programs, it's worth looking at a back and forth between Senator Elizabeth Warren (D-Massachusetts) and Tom Price, the Republican congressman who is Donald Trump's pick to run the Department of Health and Human Services (HHS).

In the exchange, which took place during Price's Senate hearing yesterday, Warren asks Price if he will commit to not using his administrative authority to "carry out a single dollar of cuts to Medicare or Medicaid eligibility or benefits."

Price responds that dollar spent shouldn't be the metric by which the program is judged. Instead, he says, what's important when judging these programs if whether beneficiaries are receiving appropriate care.

As is often the case in these hearings, Warren barely lets him respond before she interrupts, with an apology, and then goes on to insist that Price's view is incorrect. "The metric is money," she says. (Watch a clip of the exchange after the jump.)

Warren's question is designed to test whether Price will commit to Donald Trump's campaign trail promise not to cut funding for those programs, but at heart it presumes that the most important measure of success for a government program is its funding level.

Price, in contrast, argues for measuring the effectiveness and results of programs, and then balancing those results against the cost of a given program and, presumably, the cost of available alternatives.

What Warren seems to want from Price is a commitment to spend more regardless of a program's results. Warren's statement that "the metric is money" is a surprisingly blunt expression of a view of public policy that puts funding itself before measured results or any potential trade-offs.

This way of understanding of government programs and their funding presents some obvious problems.

For one thing, they always lead to calls for more federal spending, because any result, good or bad, is proof that more funding is needed. For another, they are unsustainable in the face of the long-term fiscal problems that programs like Medicare are facing. Even if federal officials decline to make cuts of any kind, eventually funding for the country's major entitlements will simply be insufficient to cover program costs. The programs, in effect, will cut themselves. Meanwhile, holding to the strictest version of Warren's no-cuts-to-anything approach would prevent the sort of technocrat reforms championed by many liberal defenders of entitlements.

In other words, even though it is typically espoused by those, like Warren, who view themselves as defenders of entitlements, it prevents improvement and reform, and leads to the exactly the sort of troubled finances we see throughout the system. In the long term, it's a view that undermines the programs it is designed to defend.

Warren's funding-first view of government is common to Democrats, but not limited to them. Republicans tend to hold some version of it, but for defense spending. Both parties are selectively devoted to sensible cuts to programs they dislike and not-so-sensible defenses of spending on programs they do like. That dynamic tends to provide a (highly imperfect) check in the system, since politicians tend to favor one side or the other.

As the next administration settles in, then, what is especially worrying is that Donald Trump, who has called for both increasing military spending and resisting cuts to entitlements, is the rare politician who appears to support both.