Soho Forum event in Manhattan will be hosted by Gene Epstein, with stand-up from Dave Smith 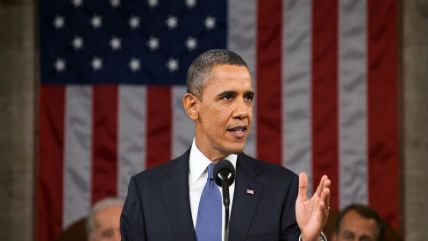 As Nick Gillespie pointed out previously in his post about interviewing the great Gene Epstein, I will be debating New York magazine political writer and frequent libertarian-baiter Jonathan Chait at the Epstein-moderated Soho Forum in Manhattan's East Village on Tuesday, Jan. 17, at 6:30 p.m. (though you'll want to be there when the bar opens at 5:45). The venue is the Subculture Theater at 45 Bleecker St., New York, 10012.

The debate, keyed off of Chait's new book Audacity: How Barack Obama Defied His Critics and Created a Legacy That Will Prevail, will be over the proposition that "Based on his record of accomplishments, Barack Obama has been a great president." I will be arguing on the nu-uh side. Libertarian comic Dave Smith provide some pre-game yuks. You'll be pleased to know that Chait's already working the refs.

You absolutely must RSVP if you wish to attend, so please click this button to do so. Click here for a recap of Nick Gillespie's Soho Forum battle with Walter Block, and check out The Soho Forum homepage for future events, with the likes of Kmele Foster.