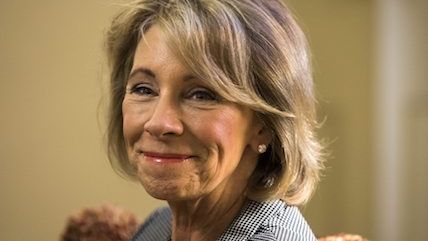 Among DeVos's staunchest critics are so-called victims' rights groups. Know Your IX, an activist organization that works to diminish due process protections for students accused of sexual assault on university campuses, is tweeting under the hashtag #DearBetsy in hopes of pressuring her to continue the Education Department's misguided and legally suspect campaign against fairness and justice in university misconduct hearings.

"Ms. DeVos must fully explain whether she supports the radical view that it should be more difficult for campus sexual assault victims to receive justice," Sen. Bob Casey, a Democrat and member of the committee that will vote on DeVos's confirmation, told Politico.

Title IX supporters portray their critics as radicals who believe that every rapist should go free and that every woman is a liar. Of course, this is not the case. The Education Department's Office for Civil Rights's (OCR) interpretation of Title IX has come under fire precisely because OCR has taken a radical position: It believes that university students accused of sexual misconduct should be left with very little means of proving their innocence before poorly trained bureaucrats. It is OCR's opinion—not Congress' or the Supreme Court's—that federal law requires universities to investigate wrongdoing in accordance with a definition of sexual harassment so broad that it threatens academic freedom and free speech while denying fundamental due process to the accused.

That's why civil liberties organizations including the American Association of University Professors and PEN America have expressed serious concerns about OCR's handling of Title IX under President Obama. These are not radical organizations, and they consist mostly of liberal thinkers who want to protect free speech and due process for all.

All that said, it's unclear whether victims' advocates have anything to worry about—DeVos's opinion on Title IX is not widely known. She has met with Sen. James Lankford, a Republican and major critic of OCR, to discuss the subject, but that's about it.

Devos is a donor to the Foundation for Individual Rights in Education (FIRE), and this fact has activists particularly worried:

The donations are "a red flag," said Lisa Maatz, the top policy adviser at the American Association of University Women, which advocates for strict enforcement of Title IX, the federal law that governs sex discrimination, harassment and sexual assault on college campuses. "In the absence of an actual record … I think these kinds of donations take on even greater importance, because we have to rely on her contributions to inform us on particular issues."

FIRE is primarily a free speech organization, and DeVos might have donated $10,000 to the group for reasons other than a desire to eviscerate Title IX. But even if DeVos shares FIRE's attitude toward Title IX (and I hope that she does), this would not make her a radical about the issue of campus sexual assault. As FIRE explains:

The basic protections for which FIRE argues—the right to the active participation of counsel; the right to see the evidence in one's case and to meaningfully question witnesses; and the right to an impartial tribunal, among others—benefit all parties and do not impede the pursuit of justice. Outside of the campus context, nobody would argue that reducing due process protections, including the burden of proof, is necessary to secure a just outcome.

Public university students who are accused of misconduct deserve a fair hearing and a chance to defend themselves: This is the idea that Title IX loyalists deem radical. If Betsy DeVos wanted to take a second look at OCR's directives, this would not make her an extremist. It would put her in the company of countless civil liberties groups that believe OCR is currently operating outside the law.

But the crusade to portray DeVos as a dangerous ideologue is mulit-faceted. Critics have not been content to hound her for possibly thinking that OCR has overstepped. They also accuse her of wanting to destroy the public education system entirely. Sensing that an education secretary who supports school choice reform is a threat to their political power, teachers unions and their allies are relentlessly insisting that DeVos is some kind of radical anarcho-capitalist or religious fanatic when it comes to private schools.

Randi Weingarten, president of the American Federation of Teachers, had this to say: "In nominating DeVos, Trump makes it loud and clear that his education policy will focus on privatizing, defunding and destroying public education in America. Every American should be concerned that she would impose her reckless and extreme ideology on the nation."

Of course, there's nothing extreme or reckless about DeVos's support for school choice reforms. School choice is broadly popular, well-liked by fair-minded policy experts, and draws support from Democrats as well as Republicans. New Jersey Sen. Cory Booker, a rising leader in the Democratic Party, was a supporter of school choice, at least until recently. He formerly served with DeVos on the board of the Alliance for School Choice, in fact. Here's what Booker had to say about school choice, according to Breitbart News:

I cannot ever stand up and stand against a parent having options because I benefited from my parents having options. And when people tell me they're against school choice, whether it's the Opportunity Scholarship Act or charter schools, I look at them and say, "As soon as you're telling me you're willing to send your kid to a failing school in my city or in Camden or Trenton, then I'll be with you."

Now that it's politically inconvenient for Booker to say anything that would perturb teachers unions—huge power brokers in the Democratic Party—Booker has changed his tune. He claims to have "serious concerns" about DeVos.

It's not just the Democratic Party stumping for the teachers unions. The New York Times, ever the enemy of a well-educated populace, accused DeVos of "damaging" the fabric of public education in her home state of Michigan, where she spent considerable money promoting charter schools:

She has poured money into charter schools advocacy, winning legislative changes that have reduced oversight and accountability. About 80 percent of the charter schools in Michigan are operated by for-profit companies, far higher than anywhere else. She has also argued for shutting down Detroit public schools, with the system turned over to charters or taxpayer money given out as vouchers for private schools. In that city, charter schools often perform no better than traditional schools, and sometimes worse.

That Times editorial relies on reporting from the Times' Kate Zernike, who claims that DeVos is a "believer in a freer market than even some free market economists would endorse" and "pushed back on any regulation as too much regulation."

DeVos did nothing of the sort, as National Review's Ramesh Ponnuru explains:

You might think, then, that DeVos got legislation enacted that, well, reduced oversight of charter schools. The linked article, although biased against DeVos, makes no such claim. Rather, it shows that DeVos intervened to force the modification of legislation about charter schools. She opposed the creation of a commission that would have given traditional public schools a say in which charter-school networks could expand and which charter schools could continue to operate. (More on that dispute here and here.) The legislation that was eventually enacted omitted that provision and instead "allow[ed] the state to close the schools at the bottom of existing state rankings." There was, in other words, no reduction in oversight and accountability.

The Times is also waging war on established facts about charter schools. Studies consistently show that not all charters succeed, but providing kids with more education options leads to better outcomes in many cases. The Times editorial states that charter schools in Detroit "often perform no better than public schools, and sometimes worse." That's a curious misreading of the data, though, according to The Cato Institute's Jason Bedrick:

The Times has already proven that it has no interest in telling the truth about charter schools Just recently, a University of Michigan education professor was given room in the paper of record to argue that economists are generally skeptical of free market alternatives to public education. But the data she used to make this point was both out of date and misrepresented in the article. According to the most recent survey data, 44 percent of economists thought a voucher system would leave most students better off, 34 percent weren't sure, and just 5 percent thought not. Among economists with an opinion on the subject, the consensus overwhelmingly favored school choice.

That's because school choice is fundamentally un-radical. Education reformers don't want to defund public education and bring back child labor, they want to provide publicly funded alternatives to government-run schools that have failed their students, who are typically the poorest and least-privileged students.

In the policy battle over school choice, it's the teachers unions who are the radicals. They believe that they are entitled to an unbreakable monopoly on providing K-12 education, in defiance of a wealth of evidence suggesting that such a system is marred by bad incentives and serves only to protect public employees at the expense of kids and families. They smear any suggestion that competition could improve the system as an attempt to destroy public schools.

No, Betsy DeVos doesn't want to destroy public schools. Nor is there any reason to believe she wants to turn rapists loose on college campuses. Those who say otherwise are the real extremists.