The Pointless Women's March Against Trump

Feminist windbags will take the air out of the anti-Trump movement. 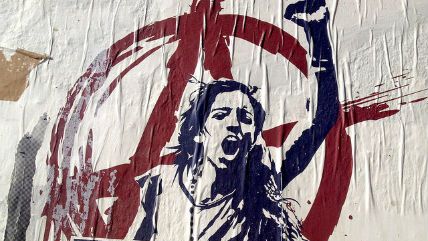 Demonstrations serve a useful function in a democracy — but only when they have clarity of purpose. That is not the case with the Women's March on Washington, which will be held in Washington, D.C., the day after Donald Trump is sworn in. If anything, this particular demonstration is shaping up to be a feel-good exercise in search of a cause. But the sad thing is that if it fizzles and fails, it'll make it harder, not easier, to fight genuine rights violations under the Trump presidency.

Plans to bring together women from all walks of life started surfacing on social media the morning after the election — partly out of disappointment that Hillary Clinton didn't get elected America's first female president, and partly out of revulsion that a loud-mouthed sexist who berated women did. Well more than 100,000 people have signed up on Facebook and other venues, at least a good portion of whom had already booked hotels and flights to D.C. in anticipation of Hillary's historic inauguration. Whether the Women's March will turn into the "biggest mass mobilization yet that America has seen in response to a presidential inauguration," as Vox's Emil Crockett has predicted, remains to be seen. But even if it does, the more meaningful test isn't how many people show up, but whether they have the seriousness of purpose to be taken seriously.

And that seems awfully doubtful.

To be sure, as Crockett points out, after a shaky start, professionals are now coordinating what emerged as spontaneous and disparate grassroots efforts around the country. So the logistics, in terms of promoting the event, coordinating with local authorities to secure the route, and making on-the-ground arrangements, are now under control.

Everything else about the Women's March, however, is reaching a level of absurdity worthy of the man they are protesting. Start with the fact that they are billing this event as the voice of women when 42 percent of women (and 62 percent of non-college educated white women) actually voted for Trump.

Then there's the almost-comical progressive hysteria over the event's name. It was initially called the Million Women March. But that was hastily dropped after the original organizers, three white women, were slammed for "cultural appropriation." Why? Because they were allegedly poaching the heritage of the 1997 Million Woman March for black women. Further appropriation concerns arose because the event evidently encroached on the legacy of the 1963 March on Washington by Martin Luther King Jr. when he delivered his famous "I Have a Dream" speech. In response to this objection, the organizers had to actually release a statement billing the Women's March as a tribute to King.

As if such bickering over semantics wasn't enough, the Facebook page of the event is rife with arguments about whether an event organized primarily by white women can be sufficiently "intersectional" — or attuned to the issues faced by, say, poor minority women who reside at the "intersection" of class, race, and gender concerns in America.

Wasn't this supposed to be about opposing Donald Trump?

Some amount of conflict in a rally (organizers don't want to call it a "protest" because they insist they are not protesting Trump, just putting him on notice) of this size and complexity is natural. But when an event is grounded in a genuine existential threat, it helps people overcome their particular interests and agendas – and find a unifying vocabulary without this level of squabbling.

If that is not happening in this case, could it be because women are not really feeling Trump's threat?

Sure, he is a sexist pig who likes to go after high-profile women — Rosie O' Donnell, Megyn Kelly, Alicia Machado — who cross him. And although he seems to have calmed down on that front since he got elected, it is entirely likely that once he's in office and faces criticism, he'll return to form. And of course, there is his disgusting history of predatory behavior.

But here's the curious thing: On women's issues, there is a wide gulf between Trump's character and his policy positions.

For much of his adult life, Trump claimed to be pro-choice on abortion. Now he insists he's pro-life, and is threatening to appoint pro-life justices to the Supreme Court. This is a genuine problem for women (like me) who strongly believe in reproductive rights. However, in other respects, Trump has made a concerted attempt to extend an olive branch to the feminist lobby. He has embraced gender wage parity, government-mandated maternity leave, and child tax deductions in defiance of his own party. One can debate the wisdom of these ideas, but not that they are intended to help women. And then there are his three female Cabinet appointments, and a fourth woman as U.N. envoy.

This is all in sharp contrast to his rhetoric and agenda to deal with immigrants, Latinos, Muslims, and blacks. (This is reflected in voting patterns: The minority gap was far wider than the gender gap between Trump and Clinton.) Trump has demonized immigrants, giving voice to every nativist trope against them, vilified Mexicans as rapists and criminals, and painted all Muslims as a security threat. He has developed frightening plans to deal with these alleged threats, ranging from mass detention and deportation of undocumented immigrants to creating a registry for Muslims. Meanwhile, he has trivialized police brutality in black communities, claiming that the real problem is the "war on cops." He emphasizes the need for more "law and order" in inner cities, historically a dog whistle to white concerns about blacks. And he has given no indication since he got elected that he'll fundamentally change course on any of this.

Donald Trump is a danger to Americans and America itself. Opposing him will require focused vigilance, and concerted activism that is targeted, intelligent, nuanced, and appropriately calibrated (as as I have argued previously). But prematurely elevating the faux concerns of a hyper-active feminist lobby will make it far more difficult to launch a serious resistance movement. It will allow Trump to depict his critics and dissenters as overwrought hysterics and dismiss the concerns of genuinely targeted groups.

Feminists are confusing the issue by making Trump's threat about themselves. If they really wanted to help, they would have kept their powder dry for now, rather than embark on this confused and pointless march.