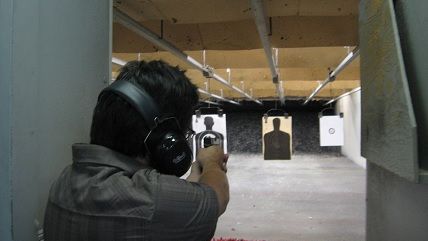 The National Rifle Association gave Terry McAuliffe an F when he ran for governor in 2013. McAuliffe said he didn't care, and if anything he seemed proud of the grade. But lately he has been taking steps that might make supporters of gun rights think better of him.

The governor already took one last year, when he hammered out a deal with Republicans in the General Assembly. They were furious at Attorney General Mark Herring, who had canceled reciprocity agreements with other states that recognized their concealed-carry permits. The deal with the governor reinstated such recognition. In return, it required the State Police to be on hand at gun shows to offer background checks, and it required individuals subject to protective orders to surrender their weapons.

Progressives thought they got the short end of the stick. So despite the governor's earlier decision to prohibit civilian bearing of arms in executive-branch offices, Everytown for Gun Safety, which has given millions to support Democrats in Virginia, took out a full-page ad to denounce McAuliffe and his deal.

Four months later, the governor grandly announced that he was restoring the voting rights of 206,000 felons. Republican heads exploded, and the ensuing debate eventually had to be settled by the Virginia Supreme Court, which struck down McAuliffe's order, requiring him to continue making restorations on a case-by-case basis.

In the meantime, though, a question arose: What about gun rights? Although McAuliffe's order stipulated that "nothing in this Order restores the right to ship, transport, possess, or receive firearms," the governor's order made it much easier for a felon to get his gun rights back. Formerly, an offender first had to petition for restoration of his civil rights, and once they were restored, go to court to retrieve his gun rights. McAuliffe's order eliminated the first step.

That was purely unintentional. "My actions were about giving you the right to vote, to serve on a jury and run for political office," McAuliffe admitted. "My action, I didn't think it had anything to do with gun rights. I stayed away from that."

Since the Supreme Court decision, the governor has continued to restore felons' rights on an individual basis; he's up to 140,000 now. And lawmakers are introducing bills to make the process automatic. Along similar lines, Republican Del. Greg Habeeb has introduced a measure to automatically restore gun rights to nonviolent felons.

Anybody who supports restoring voting rights will be hard-pressed to produce a persuasive argument against Habeeb's bill. Both voting and gun ownership are constitutionally protected, fundamental rights. The rationales that support restoring voting rights (e.g., the offender has paid his debt in full, African-Americans are disproportionately affected, the restriction has a sordid racial history, and so forth) apply with equal force to restoring gun rights.

As McAuliffe himself said, "These individuals have completed their sentences. . . . You can't be a second-class citizen. Once you've paid your time, there's no difference to me. We want you back. We want you to be a productive member of society."

Just so. But you can't be a first-class citizen if you are prohibited from owning firearms like everyone else.

This session, the governor has proposed a commendable criminal-justice reform package. It includes a badly needed adjustment to the state's standard for felony grand larceny. The figure was set at $200 in 1980, and has not been changed since. Had the threshold kept pace with inflation, it would be more than $500 today.

Adjusting the felony standard does not allow criminals to steal more; refusing to adjust it makes a felony out of ever-smaller offenses. That gets expensive fast. Virginia spends about $25,000 year per prison inmate, so a 20-year stretch for felony theft costs the state half a million dollars. Does the public really benefit from lowering the felony ceiling year after year? Do Virginians want to spend a half-million dollars to punish someone for boosting a mid-range kitchen blender from Target?

Probably not. So adjusting the felony threshold make sense. And it carries an ancillary benefit: protecting the voting rights — and the gun rights — of nonviolent offenders who otherwise would be swept up by "felony creep."

Gov. McAuliffe probably did not intend that result of his proposal. But as he already has learned, sometimes the most powerful law is the one about unintended consequences.