Washington believed that self-government was the protector of liberty and prosperity. Obama believes that, too-minus the "self" part. 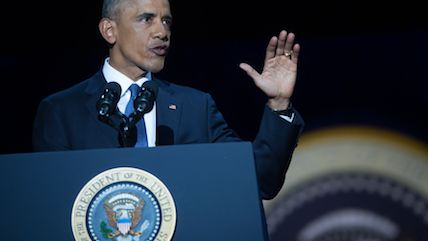 If there was a single, enduring theme in President Obama's farewell address, it was best conveyed via the following laugh line: "If you're tired of arguing with strangers on the internet, try to talk with one in real life," he said.

Indeed, Obama evidently believes strongly in the power of facts and persuasion—of just sitting down with each other, listening, and having a rational discussion. "Science and reason," held sway in his day, though he worries that the American people increasingly self-segregate themselves into partisan bubbles, beholden to entirely separate news and information.

Obama pleaded with his audience to disengage from the cycle of outrage and try to find common ground. He said:

In his own farewell address, George Washington wrote that self-government is the underpinning of our safety, prosperity, and liberty, but "from different causes and from different quarters much pains will be taken.to weaken in your minds the conviction of this truth;" that we should preserve it with "jealous anxiety;" that we should reject "the first dawning of every attempt to alienate any portion of our country from the rest or to enfeeble the sacred ties" that make us one.

We weaken those ties when we allow our political dialogue to become so corrosive that people of good character are turned off from public service; so coarse with rancor that Americans with whom we disagree are not just misguided, but somehow malevolent. We weaken those ties when we define some of us as more American than others; when we write off the whole system as inevitably corrupt, and blame the leaders we elect without examining our own role in electing them.

It's a message that hasn't actually resonated all that well with Obama's base—after all, these are the people who joined candidate Hillary Clinton in denouncing entire swaths of the populace as "deplorable" and drove them into the arms of con man. But Obama deserves credit for recognizing this problem and urging empathy.

He deserves no credit, however, for, in his words, "working to put the fight against terrorism on a firm legal footing":

That's why, for the past eight years, I've worked to put the fight against terrorism on a firm legal footing. That's why we've ended torture, worked to close Gitmo, and reform our laws governing surveillance to protect privacy and civil liberties.

Torture may have ended: illegal drone strikes have not. The U.S. bombed Iraq, Afghanistan, Syria, Libya, Yemen, and Somalia—all during Labor Day weekend this year. The Obama administration fully embraced the Bush doctrine that war-making was the prerogative of the executive branch—that the president, rather than Congress, could do whatever he pleased in the abstract name of national security.

This weakening of the U.S. system of checks and balances has already proven detrimental to the cause of limited government. It will only get worse when Donald Trump assumes office. As the Cato Institute's Gene Healy observed in the pages of Reason, Obama has left Trump a loaded gun.

Obama also touched on his successes—many of them legitimate. The president deserves credit for normalizing relations with Cuba and supporting marriage equality. He's also a decent man and a good father and husband, and worthy role model.

But for all of Obama's appeals to civility, facts, and common sense, his presidency should be remembered for its sustained assault on an obvious truth: massive, unrestricted government is dangerous. Recall the Washington quote he referenced: "Self-government is the underpinning of our safety, prosperity, and liberty. But from different causes and quarters, much pain will be taken to weaken in your minds the conviction of this truth."

Obama's record suggests that he believes government itself, not self-government, is the underpinning of our safety, prosperity, and liberty. As Trump prepares to take office—every bit the savior figure to his supporters that Obama was to his (and then some)—it seems clear that the current president has weakened the American people's conviction that they are capable of saving themselves.