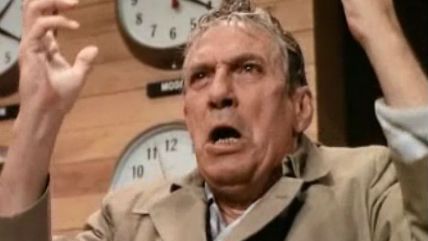 When I was a tween in smoggy Southern California, I would sporadically experience during moments of stress and high exertion unpleasant bouts of hyperventiliation. The unlikely solution? Breathe into a paper bag, until the lungs (and nerves) calm down.

The New York Times needs to breathe into a paper bag.

Last night, The Paper of Record dropped this bit of alarmism into the anti-Trump slipstream. Here's how Times columnist Charles M. Blow shared the news on Twitter:

This man is not NORMAL! He's also an outrage and offense to our protocols and institutional traditions. UGH… https://t.co/sWd8NOBCCE

When you pick through the article's alarmist adjectives to get down to the underlying facts, you're left with this nut: Politically appointed American ambassadors (i.e., those selected by the president from outside the Foreign Service, usually from a pool that coincidentally overlaps with his biggest donors and bundlers), by tradition, end their terms on Inauguration Day. Usually the president grants waivers to extend the terms of those who need a little extra time for stuff like not disrupting kids' school years. This time around, the incoming Trump administration has told the political ambassadors that there will be no waivers.

Among the phrases and quotes used to characterize this move: "quite extraordinary," "exacerbates jitters among allies," "spite and payback," "guillotine," and so on. Among the relevant notions the article leaves out: How many ambassadors are "political" (usually about one-third), and how many of them will be impacted by this change. For the latter, let's go to Associated Press diplomatic correspondent Matt Lee:

In the past two inter-party transitions (Clinton-Bush, Bush-Obama) only about 10 political ambos have gotten extensions, per officials. https://t.co/fNiAGROxDX

I suppose "Trump inconveniences 10 families" isn't a particularly sexy story, so we're left with heavy breathing like this: "The directive has…upended the personal lives of many ambassadors, who are scrambling to secure living arrangements and acquire visas allowing them to remain in their countries so their children can remain in school." In other words, a handful of very rich people find themselves having to navigate the same disruptions that multiple military families face every damned day. (Also, re: "scrambling to…acquire visas," each of the four postings referenced in the article—Costa Rica, the Czech Republic, Belgium, and Switzerland—allow U.S. citizens to visit without a visa for up to 90 days, which means that those dreaded disrupted school years can likely be stitched together via a single trip outside the country on, say, Easter.)

Part of the attempt at controversy here involves an unrealistic notion of what a U.S. ambassador actually does.

Imagine being an American injured in a terror attack in Germany or France and there's no U.S. ambassador there.

This is in fact pretty easy for me to imagine, traveling as often as I do to a part of France regularly patrolled by machine-gun-toting cops, and I can testify as someone who lived eight years abroad and who has interacted with a dozen or so U.S. ambassadors, the absence of a local embassy chief would mean squat-all. Ambassadors, particularly political appointees, are ribbon-cutters and toast-makers. Embassies, particularly in high-profile countries, are not really oriented around the concerns of individual Americans. And should something truly bad happen to you out in foreigner-land, it would almost certainly be the Foreign Service staff to help you out. Matt Lee again:

Almost all US embassies have competent career DCMs who will become charges d'affaires and ambos ad interim in absence of nominated envoys. https://t.co/fNiAGROxDX

Lee concludes, "This is a non-story. Presidents choose their own ambassadors. None, especially non-career ones, should expect to stay post-transition."

There are many things to be alarmed about the foreign policy of the incoming Trump administration (why, here's a juicy Washington Post article to chew on!). But enforcing a hard out on political ambassadorships maybe rises to the level of a slightly raised eyebrow. Trump opponents undermine their effectiveness when going thermonuclear over trivia.

You know not every outrage has to be an 11 right? Sometimes you can say, Ambassadors lose jobs a little early? Let's call that a 3 https://t.co/Z4znGfyESw