That won't stop other cities and states from trying to duplicate the dubious policy. 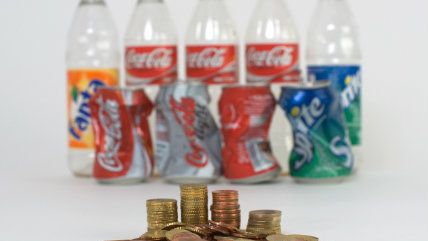 A new tax on soda and other sugary drinks that took effect in New Year's Day in Philadelphia is already generating outrage from some residents and businesses in the city.

Meanwhile, in New York and elsewhere, lobbyists and public officials are looking to duplicate the dubious policy.

When it was passed last year, Philadelphia became the largest city in the nation to create a specific tax for soda and sugary beverages, a policy that had previously been contained to progressive enclaves like Berkeley, California. The tax is levied at a rate of 1.5 cents per ounce, which makes it 24 times more expensive than Pennsylvania's taxes on beer.

Practically, that means that some drinks end up being nearly twice as expensive after the tax is applied, turning $2 sodas into $4 sodas.

That's causing quite a stir in the city, as social media posts this week have revealed. In one photo that went viral after being posted to Facebook, a receipt shows more than $3 in tax added to the cost of a $5.99 12-pack of Propel, an energy drink.

The Tax Foundation posted photos from inside grocery stores in Philadelphia and confirmed the ridiculously high taxes on products like Propel and other sports drinks. With the tax added, the 12 pack of Propel ends up costing more than a 12-pack of cheap beer, the organization noted.

City officials told KYW-3 that the tax was intended to hit distributors of sugary drinks. In a shocking twist, the TV station reported on Wednesday night that the tax "is being passed onto the customer."

After the tax was passed, some economists suggested that it would hurt businesses in the city by giving customers a good incentive to buy beverages outside city limits. Small businesses interviewed by Reason in October expressed similar concerns, since the tax is applied not only to cans and bottles of soda, but to soda fountains (like the ones found in many pizza places and cheesesteak joints across Philadelphia) too.

Already, those predictions seem to be coming true, at least anecdotally.

Congrats, @PhiladelphiaGov. You've made sure my grocery shopping will be done outside the city with this ridiculous #sodatax.

Rather than nudging people to make heather decisions about what they drink—as the tax is supposed to, even though the health benefits of soda taxes are overrated—it might just nudge Philadelphians to shop outside the city whenever possible.

Businesses in the city might suffer from the tax, but they also get to deal with more paperwork too.

Marisa Waxman, Philadelphia's first deputy revenue commissioner, tells WHYY that city retailers need to keep their bills to show their compliance, since there won't be a tax stamp or sticker on the beverages.

"Even if you are compliant," said Waxman, "make sure you are hanging on to all your invoices and records so if we show up at your establishment you can show us yep I am doing what I need to be doing."

The city will be hiring additional tax collectors to make sure everything is paid up, WHYY reports.

About the only people happy with the new tax are, predictably, the city officials who will have an estimated $90 million in new annual revenue to spend. Officials in Philadelphia sold the soda tax by promising to use the revenue to fund a new pre-K program for the city's youngest schoolchildren. As Baylen Linnekin noted in July, "spending tens of millions of dollars to expand pre-K in a city where even the most optimistic reports show city schools already fail to educate children and are routinely broke may not be the best idea."

That's really only half the story, though. Fifty-one percent of the soda tax revenue will be spent on other things, including the city's parks, economic development programs and disability benefits for city employees, among other things. By the third year the tax is in place, about 30 percent of the revenue would flow to the city's fund balance, meaning it could be used for almost anything.

Even with the outrage over Philadelphia's new soda tax, some special interests in New York State are already calling for a similar, statewide, measure there.

The New York Daily News reports that the head of a hospital lobby wants the state to impose a soda tax, with the revenue raised dedicated to help fund health care.

According to sources who spoke with the Daily News, the president of the Greater New York Hospital Association told his board that a soda tax could help ameliorate the financial hit the state's health care system faces with the potential repeal of Obamacare under a Trump administration and Republican-controlled Congress.

Michael Bloomberg has voiced support for more sugary drink taxes along the line of what Philadelphia has adopted. Four cities—Boulder, Colorado, and three California cities: San Francisco, Oakland, and Albany—approved soda taxes in November via ballot initiative and the Board of Commissioners in Cook County, Illinois, passed a soda tax in November too.

Expect more stories of sticker shock—and incredulous reporting about how taxes end up being paid by consumer even though they are targeted at distributors—as soda taxes continue to expand.