Robby Soave | From the January 2017 issue 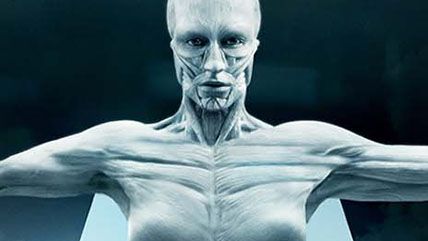 "They repeated themselves, broke down constantly," says their aging and melancholy inventor, portrayed by Anthony Hopkins. "A simple handshake would give them away."

That has changed in the grippingly realized future presented in this show, one that promises as much twisty world building and compelling human interest as Game of Thrones. The hosts have become real enough that guests can't always tell the difference—at least not at first. But that's part of the thrill: The guests can befriend the hosts, have sex with them, or even kill them if they want. Come morning, the hosts are always returned to factory condition, good as new, their memories wiped. Or so it seems.

A show about rich people living out their most sadistic and depraved fantasies (think: The Hunger Games) would constitute an intriguing, if not unique, morality play. But by casting the robots themselves as the protagonists, Westworld probes the human condition much more deeply.

There's plenty of juicy political philosophy to be had as well: Should robots have a right not to be aggressed against? Early episodes quickly establish that the ability to initiate violence is a characteristic of living things. What then to make of a robotic ranch girl who, despite her programming, casually swats a fly when it lands on her neck?