Donald Trump Does Not Really Have a Plan to Fix the V.A.

Trump's team talks vaguely of privatization, but there's no substance. 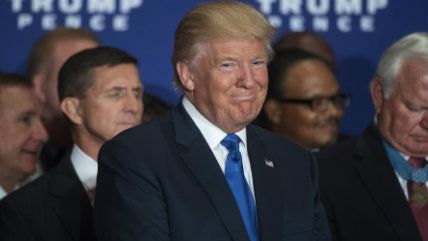 Does Donald Trump really have a plan to fix the Deaprtment of Veterans Affairs (V.A.)?

On the campaign trail, he blasted the Obama administration's handling of the V.A., and promised repeatedly to address problems in the system. This is an issue he's stuck with since the election, declaring as recently as Wednesday of this week that "we're working on something to make it great for the veterans."

So what's his plan? On Trump's website, there's a 10 point V.A. reform "vision." But that plan basically amounts to firing bad managers, hiring better ones, and then taking some other unspecified steps that fall under the heading of "modernization" while maybe putting more money towards providers. Or just shifting existing money around. Who knows, really?

Like a lot of Trump's policy ideas, the particulars were mostly unclear. Now that Trump is headed for the White House, however, we can presumably expect more details. Or maybe not.

Trump met with hospital executives in Florida yesterday, and then called out to nearby press, indicating that he wanted to talk about his plans to reform the V.A., according to The New York Times. After the reporters gathered, however, he directed them towards a senior aide, who would only speak under condition of anonymity.

Here is how the Times described the Trump aide's responses: "The official, speaking on the condition of anonymity, provided no details about how the plans would work, how much they would cost, or the possibility of unintended consequences from privatizing part of the V.A.'s sprawling medical system."

There are two things worthy of note in that short description. The first is that it is always refreshing to see the Times and other major outlets recognize the possibility of unintended consequences from policy reforms, even those that have not been explained in any detail, although it would be nice if this were applied somewhat more frequently.

The second is that despite Trump's signal to reporters that he wanted to lay out some reform ideas, he does not have anything resembling real plans in mind.

In a report on the same event, The Wall Street Journal notes that the anonymous Trump official indicated that it was possible that some totally unspecified sort of privatization option allowing veterans to access care outside the V.A. system was a possibility. But the official wouldn't elaborate or commit to anything. "It's one of the options on the table…Definitely an option on the table to have a system where potentially vets can choose either or, or all private." One of the options. On the table. Potentially!

This isn't a half-baked idea. It's a couple of ingredients you think you might have stocked in a cupboard.

Part of the problem here is that the headlines seem to imply that Trump has some sort of serious plans in the works. "Trump Weighs Letting Veterans Opt Out of VA Medical Care" is how the Times framed it. "Donald Trump Considers Moving VA Toward Privatization" was the Journal's top line. Trump does not appear have plans so much as vague avenues of possible action and exploration, with no clarity about what those possibilities might entail. They are plans in the sense that I have planned a trip to France in the next two years. (It's true that I have not ruled out the possibility of a trip to Europe. But that is as far as my "planning" has gone.)

But mainly it's an issue with the incoming Trump administration, which continues to appear to be totally averse to detailed policy planning.

That's a shame, because the V.A. could really use a serious and committed reform effort. The program has wasted billions of dollars in public funding each year, and overall management been spectacularly poor in recent years in ways that have been detrimental to veterans health. V.A. reform therefore should be a priority for the administration, and opening up the system to allow veterans to have more options from private providers should be part of the process. But it's not clear that Trump has any such plans in the works, or that his closest aides have any more details themselves. Rather than grasp the details of the problem and the possible solutions, Trump seems to understand the issue entirely in terms of its effectiveness as a retail politics selling tactic. Right now it seems as if Trump's plan to fix the V.A. is no plan at all.