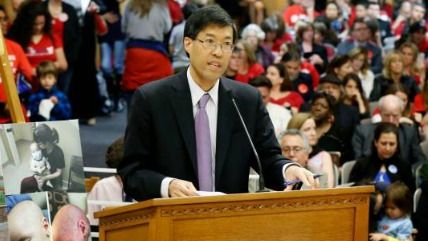 Anti-vaccine activists are sounding the alarm about a California bill that should trouble you even if you have nothing against immunization. The bill, S.B. 18, would codify the Bill of Rights for Children and Youth in California, a philosophically confused hodgepodge of false assertions and blatantly unrealistic aspirations that could be disastrous as a guide to policy.

The bill was introduced this month by Richard Pan, the pediatrician and state senator who sponsored the 2015 law that eliminated "personal belief" exemptions from state immunization requirements for children enrolled in school or day care. Critics of the new bill, who seem to consist largely of alternative medicine advocates, portray it as a threat to parental authority, gun rights, homeschooling, and health freedom. Snopes rejects those claims, noting that the critics have a grudge against Pan and that the bill does not give state officials any new authority to interfere with child rearing. Although Snopes is right on both points, Pan's seemingly anodyne bill does reflect some creepy and insidious moral premises.

As far as I can tell, Pan's seven-point list of rights—which among other things declares that "all children and youth" have a right to "appropriate, quality health care," to "social and emotional well-being," to "appropriate, quality education and life skills leading to self-sufficiency in adulthood," and to "opportunities to attain optimal cognitive, physical, and social development"—would have no immediate practical effect. It builds on a 2009 concurrent resolution that likewise did not create any new programs, authorize any new spending, or give state or local officials any new powers.

Instead of doing something, S.B. 18 would declare the legislature's intent to do something: develop and fund "research-based policy solutions that will ensure the Bill of Rights for Children and Youth of California, in its totality, is applied evenly, equitably, and appropriately to all children and youth across the state." Toward that end, the bill declares a legislative intent to "enact appropriate legislation" by January 1, 2022. Legislators would decide what's appropriate, which could involve all manner of mischief and boondoggles but also could amount to nothing at all.

All of the "rights" declared by Pan's bill are vague, and several of them involve claims on other people's resources. In Pan's view, the decision to reproduce gives people a license to raid the wallets of total strangers who had no say in that decision. Furthermore, there are no clear limits to that license, since it's anybody's guess what "appropriate, quality health care" or "appropriate, quality education" might entail, what it takes to achieve "social and emotional well-being," or how the government can guarantee "optimal cognitive, physical, and social development."

The most contentious "rights" in Pan's list are the ones that imply second-guessing of parental decisions and interference with family relationships. S.B. 18 says children have a right to "live in a safe and healthy environment," to have "parents, guardians, or caregivers who act in their best interest," and to "form healthy attachments with adults responsible for their care and well-being." Since it's not clear what happens when a parent's idea of a healthy environment, healthy attachments, or a child's best interest conflicts with a legislator's or a bureaucrat's, you can start to see why the bill's opponents call it "an attempt by power-hungry California legislators to further degrade the rights of parents," argue that it "will eventually make the State the top-dog controlling force over all children in California," warn that "it's extremely problematic to allow a very small group of people to decide what constitutes 'best' for…millions of families," or worry that Pan's dubious, undefined rights "could easily be manipulated to make a case for confiscating your child."

While these dangers are theoretical at this point and might remain so even if Pan's bill passes, the state does (and should) impose limits on parental authority, as illustrated by laws against child abuse or the debate over mandatory vaccination. A legislature that takes this vacuous list of rights seriously would be more inclined to err on the side of intervention, with potentially pernicious implications for parental prerogatives and children's welfare. Does homeschooling qualify as "appropriate, quality education"? Is a household that contains firearms a "safe and healthy environment"? Is a strict religious upbringing consistent with "optimal cognitive, physical, and social development"? Are parents who let their child eat junk food, walk to the playground by himself, or participate in risky sports acting in his "best interest"? People's opinions on such subjects vary widely. Pan's bill invites legislators to enforce their opinions under the pretense of protecting children's rights.

Pan seems oblivious to these concerns. His spokeswoman told Snopes critics of S.B. 18 "don't want to understand the bill and instead choose to make up lies about the legislation and the senator." In opposing the bill, she said, "they oppose an effort to empower parents and ensure children and families get the support they need to succeed." Common Sense Kids Action, which backs S.B. 18, likewise sees only good intentions. Beverly Kumar, a spokeswoman for the group, says Pan's bill would begin "the process of laying out a vision of the kinds of comprehensive and research-based supports every one of our state's children should have a right to access." Who could object to that?

Kumar is one of those activists who says "our children" when she is referring to other people's children, betraying a busybody mindset that slides easily from coercively funded "supports" to bans and mandates enforced at the point of a gun. Pan's bill perfectly embodies that mindset, which only wants to help and can't imagine how that attitude could cause any harm.