We've gone beyond virtue-signaling to toxic brew of all-you-people-need-to-shut-up-and-listen-to-why-you're-the-problem ranting. 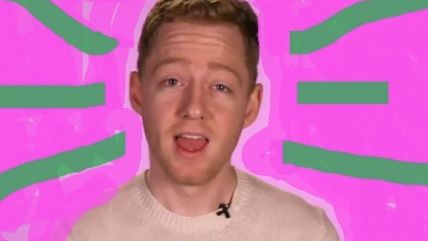 MTV—which famously took years to feature black musicians on its regular programming—has come full circle since its launch in 1981.

It has released a short video titled "2017 Resolutions for White Guys." Among the suggestions, some of which were articulated by white folks who seemed plucked from the junior versions of Prairie Home Companion and the Mormon Tabernacle Choir: "Try to recognize that America was never 'great' for anyone who wasn't a white guy"; "Blue Lives Matter isn't a thing"; "stop bragging about being 'woke'; "feel free to take Kanye West…(you know what you did, Kanye)"; "learn what 'mansplaining' is, then stop doing it"; "just because you have black friends doesn't mean you're not racist"; and more.

Take a look below. It's just over a minute long, though in fairness, it seems longer.

Hey, white guys: we came up for some New Year's Resolutions for you. pic.twitter.com/C9EeIY6wig

This is a remarkable document not so much because of the individual "resolutions" but of the source—one of those nefarious multinational corporations that specifically tries to sell fake coolness and hipness to youngsters that progressives are always railing about—and the tin-ear quality of its overall effect.

Whole swaths of corporate America—especially in the entertainment industry—seem utterly convinced that their audiences are irredeemably stupid, racist, homophobic, and beneath contempt. All this, despite massive strides toward equality under the law and growing comfort with all sorts of ethnic, racial, sexual, and lifestyle diversity. For god's sake, Donald Trump, whose surprising election is underwriting virtually all of this sort of thing, got a smaller share of the white vote than Mitt Romney did four years ago! He didn't win the presidency because he was popular. He won it because the alternative was disliked by more people. That's progress, of a sort.

The MTV vid goes beyond mere virtue-signaling into uncharted territory of contempt and spite that works to undermine all feelings of common cause that might actually make for an even more-open and tolerant United States. In this, it rivals the sort of remonstrations emanating from the pages of another hugely powerful corporate entity, The New York Times.

Here for instance is a recent tweet from Paul Krugman, who lays out all the reasons his preferred candidate lost:

So it's official, and it's vile: the loser of the popular vote installed by Russian intervention, a rogue FBI, and epic media malfunction.

Krugman, like Hillary Clinton, can blame everyone except the candidate herself. That's no way to learn, move on, and create a better world, but it does help to create an impenetrable bubble of smugness from which one never need exit (especially when you're as rich and priviliged—and white!—as Krugman and Clinton). And there's this sort of thing too:

It feels as if around the world we're mourning the death of an idea called America https://t.co/hVqfhgh1PC

Who's we, kemo sabe? Welcome to my world, in which my preferred presidential candidate has never won a single state, let alone an election, even to a lowly seat in Congress. Mine is a world in which when my policy preferences (marriage equality, say, or pot legalization, deregulation of business, and the like) actually get implemented, people immediately incorporate them into the status quo and then keep working to maintain whatever other repressive laws they prefer. It's a world in which Democrats who just yesterday were lauding Barack Obama's robust (read: unconstitutional) expansion of executive power are now shitting their pants, even as Republicans are putting on fresh diapers and getting excited about Donald Trump's ability to use his "pen and a phone" to get stuff done.

In today's America, I know that am unforgiveably white and rich and I have enough education for a family of six. Yet I come from people who 100 years ago were not considered white when they showed up here and my parents grew up in not-totally-sure-if-and-where-the-next-meal-was-coming-from poverty. I paid for my own education at every stage and remain motivated largely by a fear of sliding below the barely lower-middle-class status in which I was raised. I know what it is like to be down to the last dollar in a bank account without any plausible way to cover this month's nut. Far more importantly, I share many of the goals of the insufferable douchebags appearing in the MTV video: I want to live in a world that's even more devoid of racism, sexism, and xenophobia. I work for criminal justice reform, educational opportunity for all, open borders, drug legalization, and many other goals upon which I suspect we agree.

But as Reason columnist Andrea O'Sullivan (nee Castillo) put it, "Are the Trump people behind this?" The MTV video bespeaks a mind-set that is less interested in real change than it is in distancing itself from any sort of critical examination of why progressive ideas are so incredibly unpopular. As an old MTV star used to sing, even the losers get lucky sometime. We should start by recognizing that the 2016 election, in dethroning two dynasties (the Clintons and the Bushes) that have smothered American politics for the past 30 years like a smallpox blanket are done and there are new and wild possiblities for a 21st century based on individualism, personalization, and permissionless everything. There's plenty of work to do and realizing that Trump is the end of something, not the start of anything new is the key. And that kicking off this libertarian moment by telling so many potential allies to shut the fuck up isn't the best foot forward.