Trump's pick for Education Secretary is an encouraging break from failed authoritarian policies toward children. 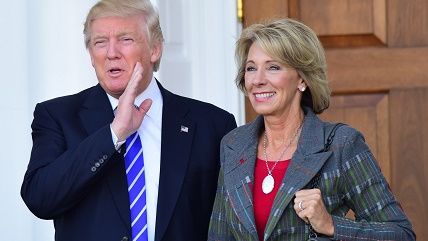 There's a lot to worry about in the coming presidency of Donald Trump, but a few bright spots appear for those of us who want to run our own lives with minimal government interference. In particular, the naming of Betsy DeVos as the president-elect's pick for Secretary of Education holds a lot of promise for parents who want to move past decades of crappy politician-directed schooling to gain more say in how their children learn.

To go by her enemies, DeVos offers promise, indeed.

DeVos is "best known for her anti-public education campaigns" the National Education Association fulminates in its official response to her nomination. The NEA goes on to take her to task for supporting "vouchers—which take away funding and local control from our public schools—to fund private schools at taxpayers' expense."

"It is clear that DeVos, like the President-elect who has chosen her, is comfortable applying the logic of the marketplace to schoolyard precincts," complains Rebecca Mead at The New Yorker. Encapsulating the nominee's sinister vision for America, Mead draws a quote from an interview DeVos gave to Philanthropy in 2013 summing up her educational dream: "That all parents, regardless of their zip code, have had the opportunity to choose the best educational setting for their children. And that all students have had the opportunity to fulfill their God-given potential."

Can't you just taste the evil?

Well, if supporting vouchers and other means to choose the best educational settings for children constitutes the oncoming headlights of America's educational doom, I say we throw ourselves right into 'em.

Actually, when it comes to real doom, public schools are already doing a hell of a good job.

"The performance of 17-year-olds has been essentially stagnant across all subjects since the federal government began collecting trend data around 1970, despite a near tripling of the inflation-adjusted cost of putting a child through the K–12 system," a 2014 Cato Institute study found. Not only did spending triple in that time, but public school employment soared, so more money and personnel were available over those decades to achieve absolutely zip–no improvement in education outcomes.

Likewise, "U.S. students are stagnating in reading and science proficiency while their math performance declined slightly," The Atlantic's Emily Richmond noted just weeks ago of the results from the latest Program for International School Assessment (PISA), which compares students from around the world. The U.S. hovers near the middle of the pack in reading and science, and toward the bottom in math.

"Stagnant" is also a good term for Americans' take on this situation, with Gallup consistently reporting since 1999 that more than half of Americans are dissatisfied with the quality of education their kids receive. The polling company notes that the lowest level of regard is reserved for public schools, with only 37 percent of Americans saying government institutions provide "good" or "excellent" education—lower scores than reported for private schools, religious schools, charter schools, or homeschooling.

Which is where Betsy DeVos comes in. She and her husband have personally funded scholarships allowing low-income children to attend private schools. She chairs the American Federation for Children, "promoting school choice, with a specific focus on advocating for school vouchers, scholarship tax credit programs and Education Savings Accounts." She was instrumental in enacting Michigan's and Detroit's charter school program.

That last achievement has proven a bit controversial, with Tulane University's Douglas N. Harris insisting in the pages of the New York Times (after DeVos's nomination) that Detroit represents "the biggest school reform disaster in the country." But "the 'well-regarded study' Harris cites actually finds that Detroit charter schools are producing significantly greater gains than traditional public school alternatives," the University of Arkansas's Jay P. Greene responded. Stopping just short of accusing Harris of making things up, Greene went on to suggest that criticism of Detroit's charter school efforts may be motivated more by ideological opposition to choice, and DeVos, than by evidence.

Arguing with people who manufacture their arguments out of whole cloth is an all-too-familiar experience for homeschooling parents like myself. So it was especially encouraging when Betsy DeVos told Philanthropy, "Homeschooling represents another perfectly valid educational option…To the extent that homeschooling puts parents back in charge of their kids' education, more power to them."

If DeVos sees those of us teaching our own kids not as enemies, but as parents doing our best for children, that puts her head and shoulders above most government bureaucrats who tinker with education policy.

And our choices are "valid," even by bureaucratic standards. Homeschooled students "score, on average, at the 84th to 89th percentile" on tests according to Brian Ray of the National Home Education Research Institute.

Likewise, research finds that, while not a panacea, "the charter school sector is getting better on average and that charter schools are benefiting low-income, disadvantaged, and special education students," as Dr. Margaret Raymond, director of Stanford University's Center on Research on Education Outcomes, puts it.

School voucher programs in cities including Washington, D.C., and New York also seem, in many cases, to improve education outcomes, including graduation rates. "Our analyses revealed positive effects on math scores for children who applied to the program from certain types of schools—those with average test scores below the citywide median," researchers reported of New York City's efforts.

Just as important, families who choose the means by which their children are educated are generally more satisfied than those whose kids go to assigned schools—probably because their choices correspond with their values and preferences. No wonder, then, that the ranks of the homeschooled have grown from 1.1 million kids in 2003 to 1.8 million in 2012—and an estimated 2.3 million this year. And we've seen high-profile growth in the number of children attending privately-managed, publicly-funded charter schools, from 800,000 kids in 2003-2004 to 2.5 million in 2013-2014.

People want to be able to guide their children's education. They generally achieve better results than government schools when their right to do so is respected. And they're happier when allowed to make such choices.

So, is there a potential downside with Betsy DeVos? Sure enough. As Cato's Neal McCluskey writes, there's a risk "that President-elect Trump will see Ms. DeVos—or that she will see herself—not just as the education department head, but rather as the national education boss." That's the overall danger with the Trump administration. If it goes full authoritarian, that top-down approach will taint everything it touches.

But we've had a top-down approach in education for a very long time in this country. It's bossed families around and turned the process of teaching children into a one-size-fits-few boondoggle that leaves not too damned many people happy—or well-educated.

If Betsy DeVos can break with that lousy tradition by expanding options for parents and children, she'll be a bright spot not just in the Trump administration, but in the U.S. government's overall treatment of education.