Labor and State nominees are worth attention. 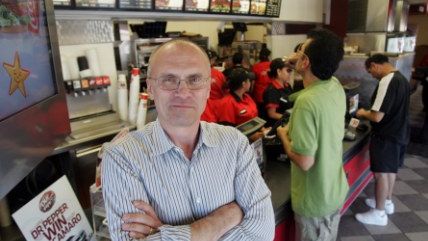 Judging from the reaction to some of Donald Trump's Cabinet choices, there are two types of businesspeople Democrats distrust: those who behave as you would expect businesspeople to behave and those who don't. Neither Andrew Puzder nor Rex Tillerson has found many champions in the opposition party.

Puzder, chosen to head the Department of Labor, is head of CKE Restaurants, parent company of the Hardee's and Carl's Jr. fast-food chains. In that job, he has learned a lot about hiring and managing employees—the "labor" that is the focus of the department's activities.

For some reason, it comes as a shock to many people that Trump would nominate someone who opposes big increases in the minimum wage. "Instead of creating a living wage," Puzder wrote last year, "the fight for dramatic minimum-wage increases could leave millions with no wage at all."

This happens to be standard economic theory. No less a liberal authority than Nobel laureate Paul Krugman, in 1998, mocked those "who very much want to believe that the price of labor—unlike that of gasoline, or of Manhattan apartments—can be set based on considerations of justice, not supply and demand."

Puzder deserves credit for creating jobs: CKE and its franchisees employ some 90,000 people. Not surprisingly, he doesn't like government dictates that raise his outlets' costs and reduce their profitability. He is candid about the advantages of machines, which, he has pointed out, never show up late or file lawsuits.

His background gives him a different perspective than a labor activist would offer. But union champions rarely join Republican Cabinets. Unlike some Trump appointees—I'm looking at you, Ben Carson—Puzder won't need a crash course on the issues his department handles.

Nor is he hostile to compromise. Based on an interview in March, the Los Angeles Times reported that "he's not against a minimum wage higher than today's federal level of $7.25 an hour, or even to indexing the minimum to inflation."

Puzder could mitigate some of Trump's worst impulses. During the presidential campaign, he argued that "every candidate should support a path to legal status—short of citizenship—for illegal immigrants."

Tillerson, picked for secretary of state, is not a cartoon version of the Texas oilman. As president of the Boy Scouts of America, he pushed to allow gay troop leaders. Exxon Mobil has donated to Planned Parenthood. The right-wing Family Research Council warns that Tillerson "may be the greatest ally liberals have in the Cabinet for their abortion and LGBT agendas."

Most notably, he endorsed a carbon tax to combat global warming—and Exxon Mobil has lobbied Congress to pass one. Having someone with that viewpoint in the most important foreign policy job could be helpful to the planet.

Critics think he will put the interests of big oil above those of the American public. But CEOs are not free agents. They are used to serving the interests of shareholders while catering to customers.

As head of Exxon Mobil, Tillerson profited from high oil prices. But had he gone to Ford, he would have acquired a new preference for cheap fuel. There's no obvious reason that Tillerson can't similarly shift his allegiance to serving the public interest (to the extent his boss allows).

Besides, his background invites merciless scrutiny of any decision that affects his old industry. He can expect to be held to a tougher standard on such matters than anyone else would be.

Tillerson came to the president-elect's attention at the suggestion of Robert Gates, who served ably as defense secretary under George W. Bush and Barack Obama and endorsed Hillary Clinton. Gates' recommendation ought to carry bipartisan weight, even if his consulting firm has done work for Exxon Mobil.

Tillerson hasn't been a diplomat, something he has in common with John Kerry, Clinton and Condoleezza Rice. But like diplomats, he has spent a lot of time working with (and around) regimes he didn't necessarily approve of.

Gates says he is "a hard-eyed realist." Those who fear he's too fond of Vladimir Putin can take heart that Dick Cheney, no starry-eyed appeaser, has endorsed Tillerson.

Business executives can bring assets that make for better government. These two offer relevant experience and seasoned judgment, which may be scarce in the Trump administration.

After weeks of hearing about scary candidates for important jobs—Rudy Giuliani, Sarah Palin, Newt Gingrich—Puzder and Tillerson come as a relief. Senate Democrats should rush to approve them before Trump can change his mind.