Instapundit Glenn Reynolds lays out reform that will maintain antidiscrimination law while taming its excesses. 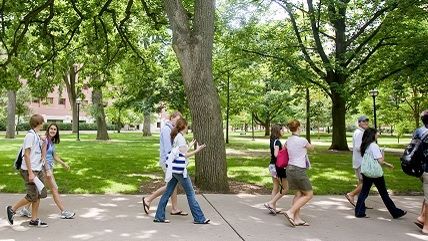 There's little question that Title IX of the Education Amendments of 1972, which bars discrimination in federally funded schools and programs, has been interpreted by education bureaucrats and college administrators as mandating that they peer into every nook and cranny of university life. As Glenn Reynolds of Instapundit and the University of Tennessee's law school writes, "from this small, simple statement — there shall be no discrimination on the basis of sex — has been created a regulatory Tower of Babel governing sports teams, student discipline and even, and most dubiously, sexual consent."

Indeed, as Cathy Young documented in a January 2014 cover story for Reason magazine, much of the climate of hysteria on college campuses around sexual activity can be traced back to a "dear colleague" letter from the Department of Education's Office of Civil Rights, which urged university administrators to lower the burden of proof and reduce due process protections when prosecuting cases of rape and harassment. As Linda LeFauve and Robby Soave have shown, that sort of decision didn't simply come out of the blue but followed a decade or more of extremely dubious social science capturing the minds of administrators and regulators.

Writing in USA Today, Reynolds says that one good aspect of a Donald Trump administration may be the rollback of the most extreme (and ultimately pernicious) interpretations of Title IX. He stresses that the reigning interpretation of Title IX is not actually law or even fully articulated and binding rules. Rather, the "dear colleague" letter is used to nudge institutions along without necessarily taking full responsibility for any outcomes.

The new Education Department [might] do something the previous department didn't do — probably for fear of being overruled by the courts — which is to actually promulgate new binding regulations after notice and comment. Those regulations might say that colleges should turn over complaints of sexual assault to law enforcement authorities, and that things like "microaggressions" and opinions with which one disagrees do not constitute "discrimination."…

Ideally, we'll take an approach based on due process and common sense, which would represent a considerable change over the past several years' policies.

One thing is clear: The micromanagement of universities — and of students — in the name of Title IX needs to change.

Read the whole thing here. Relying on the Trump administration to exercise "common sense," as Reynolds hopes, may be a bridge too far, but his proposed Secretary of Education, Betsy DeVos, is likely to agree with the notion of Title IX overreach.

In 2015, Reason TV talked with Robby Soave about "3 of the Most F*cked-Up College Campus Stories of the Year." Check it out here:

And subscribe to our Reason Podcast at iTunes, near-daily new conversations hosted by me and other Reason staff with leading newsmakers, authors, and libertarians. Here's what some listeners are saying:

For even more ways to follow Reason's audio and video offerings: