Ten students of color were suspended for sexual misconduct, even though the police said it was consensual. 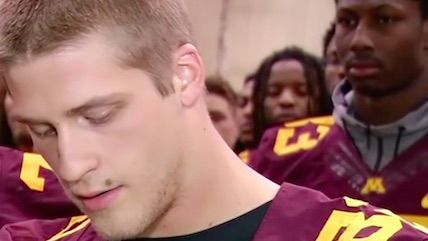 A major showdown over Title IX is brewing at the University of Minnesota, where the entire football team has agreed to boycott future games in support of 10 players who were suspended for sexual misconduct violations.

Student-athlete Drew Wolitarsky read a statement on behalf of the team Thursday night in which he blamed the administration for conducting an "unjust Title IX investigation without due process."

"We are concerned that our brothers have been named publicly with reckless disregard in violation of their constitutional rights," he said. "We are now compelled to speak for our team and take back our program."

Coach Tracy Claeys appears to be in full support of the boycott. "Have never been more proud of our kids," he tweeted.

The incident in question took place the night of September 2, after the team's season-opener. One female student alleged that she was involved in nonconsensual sex with several people, including Carlton Djam, one of the football players. According to The Star Tribune, the woman consumed "five or six" shots before heading to a party where she met Djam. He took her up to a bedroom and proceeded to have sex with her. She then engaged in sex with a number of other men—she told the police they waited in line to "take turns." She thought as many as 12 men were involved, though she couldn't recall the exact number.

That's the woman's version. Djam told police that their sex was fully consensual. He produced three video clips taken on the morning in question that showed the woman was "lucid, alert, somewhat playful and fully conscious; she does not appear to be objecting to anything at this time," according to the police report. This satisfied the police and no charges were filed.

The woman then pursued a restraining order against six football players, and an agreement was reached: they had to stay away from her, and she agreed not to take further legal action against them.

End of story? Nope. That's because the university has its own process for investigating sexual misconduct that is separate from the police. According to the Education Department, Title IX—a federal statute mandating equality between the sexes in public education—requires universities to adjudicate sexual misconduct internally. These Title IX proceedings often deny fundamental due process rights to accused students, since the Office for Civil Rights—the agency that ensures Title IX compliance—has instructed universities to use a lower standard of proof. OCR guidance also discourages administrators from allowing cross-examination, one of the most vital tools a defendant has to prove his or her innocent.

As a result of Minnesota's Title IX proceeding, 10 players were suspended. The Pioneer Press reported that expulsion was recommended for at least one of them.

The New York Times wrote about the boycott, which seems likely to become a major national issue—and hopefully result in increased scrutiny of OCR. The NYT wrote that "burdens of proof used in [Title IX] investigations are by law lower than the criminal justice system's," which is a bit misleading, as KC Johnson pointed out. It is OCR's opinion that Title IX—a one-sentence statute—requires university administrators to use the preponderance of evidence standard. But neither Congress, nor the courts, nor the Minnesota legislature have approved such a requirement.

That's not the only curious thing about the NYT's coverage.

Note that every single one of the 10 suspended students is black. We don't know what, exactly, they are all accused of—recall that the woman only filed restraining orders against six of them—but we do know that they are all students of color, because they were named and publicly identified.

The Times glosses over this detail.

Given the fact that the criminal justice system is plagued by implicit and explicit racism, it's astonishing that the paper of record would ignore the racial implications of a university denying fundamental due process to 10 black students and then punishing them for sexual misconduct.

*Updated on December 17 and 1:00 p.m.: The Gophers have ended their boycott. The suspensions remain in place.