'People feel as if they're not being heard.' 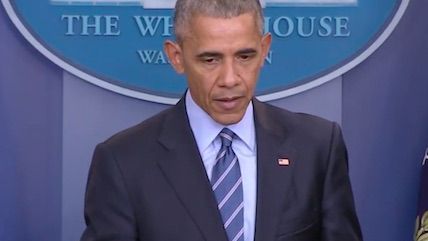 In his final press conference as commander-in-chief, President Obama talked about how his administration handled Russia's alleged hacking of DNC emails and whether it cost Hillary Clinton the election.

He declined to speculate on the latter. He did, however, note that the perception of Democrats as out of touch—as "politically correct"—damaged the party's chances.

On the hack, Obama noted that the available intelligence indicates "the Russians were responsible." He was not prepared to state unequivocally that the Russian government was involved, however.

"My hope is that the president-elect is going to be similarly concerned with making sure we don't have foreign influence in our election process," he said.

The president said that it was up to the pundits to determine whether the hack had an impact on the election. The president defended the actions taken by his administration. He thought making a bigger issue of the hack during the campaign would have cast doubt on the outcome of the election—a bad thing for our democracy.

While Obama spent most of the press conference talking about Russia and Syria, he did take a minute to reflect on the fact that negative perceptions of out-of-touch Democrats worked against them in the election.

"People feel as if they're not being heard," he said. "Democrats are characterized as coastal liberal latte-sipping politically-correct out-of-touch folks."

Sen. Bernie Sanders understands that political-correctness-run-amok pushed people into the Trump camp. President Obama appears to understand that, too. When will the rest of the party admit it?

You can watch the rest of the press conference live here.