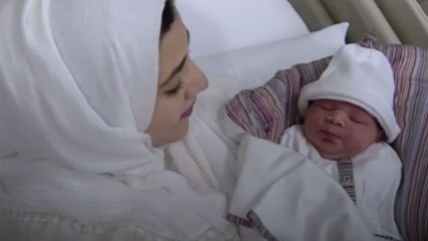 On Tuesday, a baby was born. NBD. Happens all the time.

This baby, though, is the first person ever made with an egg from an ovary that had been removed from the mother when she was pre-pubescent.

As a 9-year-old child, the BBC reports, Moaza Al Matrooshi had aggressive chemotherapy followed by a bone marrow transplant from her brother to treat a potentially fatal blood disorder, which did a number on her remaining ovary—so much so that as a young adult she had started to go into early menopause.

So doctors fetched her ovarysicle from cryopreservation, where it had been chillin' in some liquid nitrogen at minus 196C for 15 years. They sliced off four slivers of tissue and implanted them into the busted ovary, plus one more into the side of her uterus.

And darned if she didn't start ovulating. To maximize the odds of success, docs plucked those eggs out (they got eight) mixed them with her husband's sperm in a petri dish to produce embryos (they got three) and implanted two of those embryos via IVF. Thirty-eight weeks later, give or take, one baby was born.

Al Matrooshi hails from Dubai, her ovary was frozen in Leeds, her cancer was treated in London, and the thawed tissue was implanted in Denmark. Then back to London for the baby's birth at the American-operated Portland private hospital.*

The fertility math and medical geography sound almost unbelievable, and indeed when the ovary was initially frozen this scenario was pure science fiction; Al Matrooshi's own mother suggested saving the ovary as a crazy long shot.

But this baby's not a miracle. He's the product of a bunch of individuals' inspiration and hard work and risk-taking and study and travel and pain and a crapton of money. All the factors came together now the world gets a real live bonus human. Well done, everybody.

Al Matrooshi has another embryo on ice, technically the twin of her newborn son, and is already thinking about kid number two.

*Edited to clarify a confusing geographical reference to Portland.