Vivek Murthy's concern about adolescent vaping is overwrought, and his propaganda is pernicious. 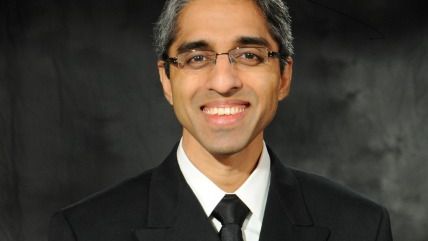 A new report from Surgeon General Vivek Murthy repackages familiar alarmism about e-cigarettes, which it depicts as a grave threat to the youth of America using the same deceptive techniques favored by U.S. Centers for Disease Control and Prevention (CDC). "To protect our nation's young people from being harmed by these products," Murthy recommends policies, such as higher taxes, vaping bans, limits on advertising, and possibly flavor restrictions, that will undermine public health by making e-cigarettes less appealing to people who currently get their nicotine from conventional cigarettes, a much more dangerous source.

Murthy declares that e-cigarette use by teenagers "is now a major public health concern," noting that it rose "an astounding 900 percent" from 2011 to 2015. "These products are now the most commonly used form of tobacco among youth in the United States, surpassing conventional tobacco products, including cigarettes, cigars, chewing tobacco and hookahs," says Murthy, who worries that e-cigarettes "could be an avenue by which kids are addicted to nicotine" and eventually start smoking.

The numbers cited by Murthy come from the CDC's National Youth Tobacco Survey, which found that the share of high school students who reported using e-cigarettes in the previous month rose from 1.5 percent in 2011 to 16 percent in 2015—an increase of 967 percent. But according to data from the Monitoring the Future Study, another government-sponsored survey of teenagers, nonsmoking adolescents almost never vape often enough to get hooked on nicotine. In the 2014 survey, just 0.7 percent of never-smoking 12th-graders reported vaping on 20 or more days in the previous month. Furthermore, adolescent vapers typically use nicotine-free e-fluid, so the share of nonsmoking teenagers who are even theoretically at risk of nicotine addiction via vaping is even smaller—something like 0.3 percent.

In addition to highlighting big numbers with little public health significance, Murthy copies the CDC's habit of calling e-cigarettes "tobacco products," which they aren't. That description falsely implies that the risks posed by vaping are similar to the risks posed by smoking, when they are in fact dramatically lower. Although Murthy concedes the difference in risk, his office deliberately obscures it. "Aren't e-cigarettes safer than conventional cigarettes?" asks a "tip sheet for parents" posted today. The recommended answer is absurdly evasive: "Because your brain is still developing, scientific studies show that it isn't safe for you to use any tobacco product that contains nicotine, including e-cigarettes. Whether you get nicotine from an e-cigarette or a cigarette, it's still risky. Some e-cigarette batteries have even exploded and hurt people." Uh, thanks, Mom, but how about answering the question?

This is propaganda masquerading as science, which has already warped public perceptions of the hazards posed by e-cigarettes. In a recent survey of American adults by Vanderbilt Law School professor W. Kip Viscusi, 48 percent of respondents incorrectly said e-cigarettes are either just as hazardous as the conventional kind or even more hazardous. Thirty-eight percent said e-cigarettes are less hazardous, but only 14 percent correctly said they are much less hazardous. Since Americans already tend to think e-cigarettes are much more dangerous than they actually are, Murthy's recommendation that public health agencies and medical professionals get out the word about the hazards of vaping is rather alarming, especially if his office's educational efforts are meant to be a model. Such efforts to scare people away from e-cigarettes are positively pernicious and potentially lethal to the extent that they deter smokers from making a switch that could save their lives.

"My concern is e-cigarettes have the potential to create a whole new generation of kids who are addicted to nicotine," Murthy told the Associated Press. "If that leads to the use of other tobacco-related products, then we are going to be moving backward instead of forward." In his foreword to Murthy's report, CDC Director Thomas Frieden warns that "many of today's youth who are using e-cigarettes could become tomorrow's cigarette smokers." But there is little reason to think that is happening, especially since smoking rates among teenagers have hit record lows despite the "astounding" increase in e-cigarette use.

The New York Times, citing "researchers," says "there is no evidence that the increase in e-cigarette use is leading to the drop in smoking." But there is more evidence to support that hypothesis than there is to support Murthy and Frieden's fear that vaping is a gateway to smoking.

"We know enough right now to say that youth and young adults should not be using e-cigarettes or any other tobacco product," Murthy told The Washington Post. "The key bottom line here is that the science tells us the use of nicotine-containing products by youth, including e-cigarettes, is unsafe."

There he goes again, inaccurately calling e-cigarettes a "tobacco product" and thereby ignoring a crucial question about teenagers who vape: What would they be doing otherwise? Even if we focus on the tiny percentage of nonsmoking teenagers who regularly vape nicotine, it is not safe to conclude that they would face lower health risks if e-cigarettes had never been invented. In that case, they might have gotten their nicotine by smoking tobacco, which would hardly represent a victory for public health.