It's not what America needs, or should want. 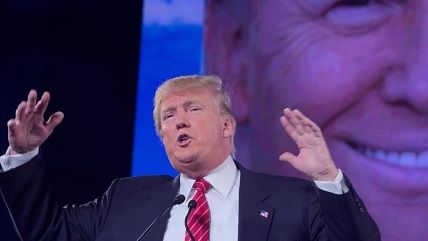 It's refreshing to watch Trump mock the media and political correctness. How dreary the world would be today if we faced four more years of condescension from Hillary Clinton and her apparatchiks.

Many of Trump's supporters like him because they say he's a leader who will "get things done."

That's not necessarily a good thing.

Recently, my Twitter feed contained Trump saying: "Nobody should be allowed to burn the American flag—if they do, there must be consequences—perhaps loss of citizenship or a year in jail!"

Yikes! Mr. President, burning a flag is free speech. And don't we have property rights? If I buy the flag, it's mine. No one has a right to tell me what I can do with it. Recently, Trump bullied and bribed executives from the Carrier air conditioner company into withdrawing plans to move a factory to Mexico.

"Like a despot drunk and delirious with power," wrote economist Don Boudreaux, Trump "bellowed that '(c)ompanies are not going to leave the U.S. anymore without consequences.'"

Those are the kind of things socialist dictators say.

Trump's no socialist. He is obviously a businessman who loves making money. But that doesn't mean he understands the conditions necessary for other people to prosper.

These are terrible ideas.

I think about how "strongmen" leaders have worked for other parts of the world.

Venezuela voted in a strong leader. Now the country's collapsing into economic chaos: looting, shortages of food, riots. That's what an autocrat can do.

Venezuela was once the most prosperous country in South America. Then Venezuelans elected Hugo Chavez. He promised to throw out the establishment and make Venezuela … well, better, if not "great."

Oliver Stone made a movie praising him and then invited the tyrant to join him at the film's premiere. After Chavez's death, Stone released an even more absurd documentary called My Friend Hugo.

This was ludicrous, as the chaos in Venezuela now makes clear.

But many Americans still want a leader who offers similar solutions.

I naively assumed that the collapse of the Soviet Union would make it obvious to everyone that socialism kills both prosperity and freedom. If that didn't, then the poverty in Cuba, Cambodia, Tanzania, Somalia, North Korea, etc. would convince them.

But no! People still think socialism will make a country more "fair" or "equal" by punishing the rich.

By "neoliberal," Corbyn didn't mean left-wing. He meant support for global trade. Donald Trump wants to rein that in, too.

In Venezuela, Chavez cut off foreign trade. When shortages occurred, his successor blamed an "economic war" waged by capists.

Trump often blames China—although economists estimate 12 million U.S. jobs depend upon our trade with China. He mocks NAFTA, our trade agreement with Mexico and Canada, but economists call that a job creator, too.

What Donald Trump and Bernie Sanders don't realize is that commerce is not zero-sum—trade with China does not mean China wins and we lose. In most cases, we both win.

Wealth is created when governments get out of the way and let people trade as they please, within borders or across borders.

I don't want a "strong leader." I want a president of this constitutional republic to preside over limited government and leave us free to lead our own lives.