Time to End Discrimination Against Gays?

Many people believe it's already against the law. 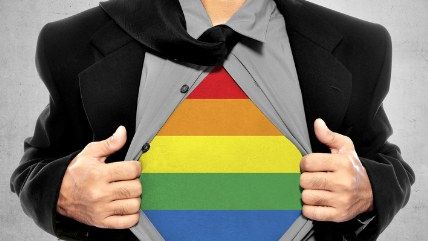 On gay rights, America has come a great distance in a short time. Remember the days, not so long ago, that gays stayed in the closet, sodomy was a crime, same-sex marriage was banned and people could be fired from their jobs because of their sexual orientation?

Actually, you don't have to try to remember that last. It's still the case in 28 states, including Mike Pence's Indiana, that holding hands with your same-sex partner in public can mean losing your livelihood. A bigoted boss can cashier a good employee for loving someone of the wrong gender.

This unprotected status is an anomaly under the 1964 Civil Rights Act, which forbids employment discrimination on the basis of "race, color, religion, sex, or national origin." African-Americans and other racial minorities are protected, Catholics and Muslims are protected, women are protected and immigrants are protected. Gays are not.

Many libertarians, whose general principles I share, think the law is an intolerable infringement on contractual freedom. When Gary Johnson, the party's presidential nominee, said at the Libertarian Party's national convention in May that he would have voted for the 1964 Civil Rights Act, he was booed.

But pretty much everyone else agrees that ship has sailed, as well it should have.

The question now is not whether federal law should ban discrimination on the basis of certain criteria. It's merely which criteria deserve inclusion.

On this issue, the public took the side of gays even before coming around on same-sex marriage. Most Americans think discrimination on the basis of sexual orientation should be illegal. Not only that, a 2015 survey by the Public Religion Research Institute found that 75 percent think it already is.

A study by the Williams Institute at the UCLA School of Law reported, "A majority of Americans in every U.S. congressional district support laws that protect against employment discrimination on the basis of sexual orientation."

Such an expansion would make sense, because gays are similar to other minorities that have long been targets of hostility and mistreatment. But when the 1964 law was passed, no one was thinking of protecting gays, who were widely viewed with ignorant disgust. And a bill known as the Employment Non-Discrimination Act has been repeatedly introduced in Congress, to no avail. So federal law leaves gays out in the cold.

Or does it? A lawsuit heard on Nov. 30 before the 7th Circuit Court of Appeals in Chicago argues that the federal law against discrimination on the basis of sex should be interpreted to cover sexual orientation. Nearly all of the judges who asked questions appeared to find much merit in the argument.

Frank Easterbrook, a renowned conservative appointed by Ronald Reagan, noted that in its 1967 decision in Loving v. Virginia, the Supreme Court struck down a law forbidding interracial marriage because it treated people of different races differently. A black woman could marry a black man but not a white man. She was penalized solely because of her race.

Hively allegedly suffered retribution not for having a female partner, which would be perfectly fine if she were a man, but for being a woman who has a female partner. How can that not qualify as sex discrimination?

The obvious retort is that the lawmakers who approved the 1964 Civil Rights Act didn't mean to prohibit discrimination on the basis of sexual orientation, and therefore it doesn't. But they also didn't set out to deter sexual harassment of men by men or to prevent the firing of women because they are perceived as unfeminine—both of which the Supreme Court has ruled illegal under the law.

Conservative hero Justice Antonin Scalia, writing in 1998 for a unanimous court, agreed that such conduct was not what Congress had in mind. "But statutory prohibitions often go beyond the principal evil to cover reasonably comparable evils," he wrote, "and it is ultimately the provisions of our laws rather than the principal concerns of our legislators by which we are governed."

Sooner or later, discrimination against gays will no longer be treated as an acceptable, legal practice. Then Americans will wonder why on earth it took so long.