Al Gore Wouldn't Have Invaded Iraq, Third Parties are a Threat to Democracy, and Other New York Times Delusions 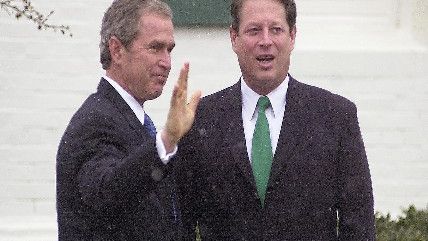 According to Gail Collins' latest column in The New York Times, Ralph Nader cost Al Gore the 2000 election and thus enabled the Iraq War because unlike George W. Bush, Gore would have never invaded Iraq. "Case closed," Collins so authoritatively puts it.

Collins muses that "it's definitely possible" Clinton could have received every vote that instead went to Stein and seethes at Stein's insistence that most people who voted for her would have just stayed home without the Green Party on the ballot.

We had heard something similar from Ralph Nader, whose presence on the ballot in 2000 probably cost Al Gore Florida, and the presidency. On many of Nader's issues, Gore was not great. But the point of the American system of democracy is that in the end, you often have to take the responsibility for choosing the better of two unlovely options. And if Gore had been elected, we wouldn't have invaded Iraq. Case closed.

First off, Ralph Nader may have earned far more votes in Florida than Gore would have needed to defeat Bush (and thus, win the presidency) in the Sunshine State, but more than 12 times as many registered Florida Democrats voted for Bush than Nader. Further, Gore didn't even win his home state of Tennessee, which if he had, would have been enough to win the presidency and make Florida's tally irrelevant.

But just like in 2000, when Democrats and sympathetic Top Men and Top Women in media refused to consider Gore ran a terrible campaign, Collins and others want to pin Donald Trump's stunning electoral victory on disobedient voters who rejected the two-party duopoly which produced the two least popular candidates of all time.

Examining exit poll data in the wake of the 2016 election, I noted the lack of enthusiasm for either major party candidate among third party voters:

CBS News' exit poll posed the hypothetical question of who third party voters would support if the race were only Clinton and Trump, and both [Libertarian Party candidate Gary] Johnson and Stein supporters appeared to support Clinton over Trump by about 25 percent to 15 percent. But 55 percent of Johnson's supporters would have just sat out the election, as would 61 percent of Jill Stein supporters. According to New York Times exit polling, a whopping 63 percent of voters who declined to cast their ballot for the two major party candidates said they would have not voted at all in a two candidate race.

Second, it's a howler that Collins is so certain ("Case closed") Gore wouldn't have invaded Iraq, considering he was one of the few Senate Democrats to vote in favor of the first Gulf War, uber-hawk Joe Lieberman was his running mate, and he had spent his entire legislative career as a liberal internationalist consistently supporting military interventions on humanitarian grounds. Gore also defended air strikes in Iraq as Vice President and, as a candidate for president, supported the U.S. policy of removing Saddam Hussein from power which President Clinton made official with the signing of the Iraq Liberation Act of 1998.

In 1996, when Republican nominee Bob Dole criticized Clinton for lobbing cruise missiles into Iraq, Gore retorted, "Sometimes the U.S. has to take unilateral action when our interests are at stake." In May 2000, speaking at the American Israel Public Affairs Committee Conference, Gore bragged on being an Iraq hawk and stressed that "it is our policy to see Saddam Hussein gone…"

We can play "alternative history" games all day, but it arguably makes less sense to insist Gore would definitely not have invaded Iraq as it would to declare the opposite.

Finally, is it really "the point of the American system of democracy" to choose "the better of two unlovely options"? If that's the point, why not ban third parties, independent candidacies, and write-in votes altogether for the sake of preserving American democracy?

"Serious thinkers" like Collins and Rachel Maddow and Joss Whedon believe that votes cast by independent and third party voters this election rightfully belonged to the Democratic candidate whose strategy for winning them over was not to seriously consider any of their policy concerns, but instead to launch a billionaire-funded multi-million dollar ad campaign meant to shame them.

It's more than a little ironic that Collins' cites the Iraq War as a consequence of those pesky Nader voters in 2000, especially since non-interventionism was a major driving force behind the Libertarian and Green Party candidacies of 2016. With regards to Clinton's campaign in particular, the former secretary of state never missed an opportunity to boast of her foreign policy experience and record of supporting every single U.S. military intervention of the past 25 years.

Perhaps the Democrats could have won a few more of those Green, Libertarian, and independent voters if they hadn't spent so much of 2016 trying to out-hawk Trump and the Republicans on matters of war and civil liberties? Collins won't engage in such nuance, she'd rather simply declare that Stein "screwed up, big time," while Clinton's mistakes go unmentioned.