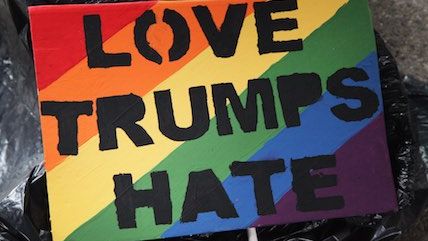 The Southern Poverty Law Center has produced another report in support of its thesis that the election of Donald Trump has unleashed a wave of racist, sexist, anti-immigrant, anti-Muslim bullying in American schools.

The organization is invested in the idea that hate is rampant and things are basically always getting worse. That said, SPLC's latest report does contain an impressive amount of anecdotal evidence that a great many teachers are dealing with increasing levels of bullying, and some of it is indeed Trump-inspired.

Even so, the evidence is anecdotal. The SPLC's report, "The Trump Effect: The Impact of The 2016 Presidential Election on Our Nation's Schools," surveyed more than 10,000 teachers, but buries a crucial fact three-quarters of the way down the page—the survey was unscientific. Respondents were people who either subscribe to the SPLC's Teaching Tolerance newsletter or were forwarded the survey by an SPLC-aligned group. Bottom line: The people who participated in this survey are people who are predisposed to share the SPLC's extra-sensitivity to hate and bias.

Why describe them as "extra" sensitive? An examination of the kinds of things the teachers reported is useful. From the report:

"The day after the election, I broke up a fight in the locker room because of differing opinions around each student's choice for president." —HIGH SCHOOL TEACHER, ILLINOIS

But that kind of bullying has always existed. Students fight with each other. Students are capable of great cruelty. That cruelty is sometimes connected to things that are happening in the news.

The SPLC and its allies aren't just claiming that the usual bullies are now citing Trump: They are claiming that Trump has inspired an historically-unprecedented surge of bullying, violence, and hatred in schools. They might be right. Trump advocated some horrible things, and is himself something of a bully. He insulted his rivals. He mistreated a number of women. Do students take their cues from the president-elect? It's possible.

I don't blame Muslim and Latino students for being worried about their future, and it does seem like Trump might be having at least some effect on the tone and frequency of bulling incidents in schools. But it's going to take more time to process all this. As I noted in an earlier post, we don't yet have any actual data on bullying rates for 2016. Therefore, we should be cautious about making sweeping generalizations about the state of affairs.