New law aims to reduce bovine flatulance, but will the cows obey? 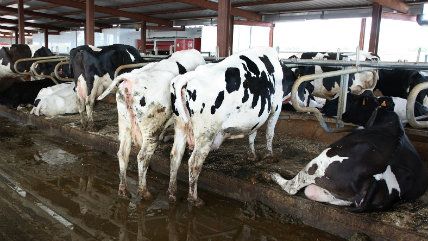 Livestock are responsible for roughly 15 percent of the world's greenhouse gases, but if you think getting people to stop driving their cars or using electricity is a difficult task, good luck preventing cows from farting.

California is going to try.

"This bill curbs these dangerous pollutants and thereby protects public health and slows climate change," said Gov. Jerry Brown said in a statement when he signed the bill in September, against the wishes of the state's farmers.

The law won't stop cows from farting, of course, because cows are notoriously disrespectful of human-passed laws. Instead, it will make life more difficult for dairy farmers in California.

Dairy farms will be required to reduce methane emissions to 40 percent below their 2013 levels by 2030. The state will spend $50 million help offset the cost of so-called "dairy digesters," which are intended to capture methane spewed from cows and convert it into electricity. After that, the state's Air Resources Board will have the authority to set whatever regulations they deem necessary to reach the stated goal.

Cow farts—or "bovine entric fermentation" if you want to sound smart—pump a lot of methane into the environment. A single cow can produce up to 130 gallons of methane in a single day (even that's not as bad as what dinosaur farts could do), and methane is a more potent greenhouse gas than carbon dioxide.

Even if California were to find a way to stop cows from farting—or, more likely, if it were to regulate all its dairy farms out of existence—there would be a miniscule impact on global methane levels. California isn't even the leading producer of agricultural methane in the United States, according to the Environmental Protection Agency.

On a global scale, the tiny microbes that grow on the roots of rice plants produce 30 percent of all agricultural methane on Earth.

California's not the first to target cows in an effort to rein-in global warming. Some ethical vegetarian groups have allied with global warming activists to call for reducing the number of cows in Africa.

The attack on dairy cows is part of a broader effort to reduce California's greenhouse gas emissions to 40 percent below 1990 levels by 2030. Doing that means giving a lot more power ot the state's Air Resources Board, which now finds itself in the business of regulating what comes out of bovine buttocks. According to an Associated Press report this week, the board is hoping California's proposal will be a model for other states to follow.