According to one student senator, the organization didn't want to give the wrongful impression that free speech is, like, the greatest. 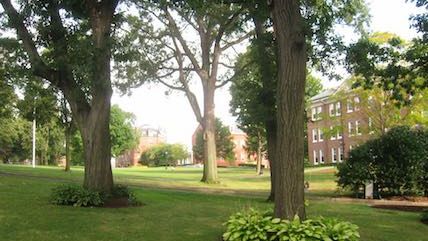 Tufts University's student government voted down a resolution (26-0) asking administrators to clarify whether the institution's commitment to free speech is in conflict with its policies forbidding sex jokes.

According to one student senator, the organization didn't want to give the wrongful impression that free speech is, like, the greatest.

"50 percent of students on this campus are not from America, and there are other countries with free speech issues, and some countries handle them better than America," said one member of the Tufts Student Senate, according to The College Fix. "I think saying First Amendment rights, best kind of rights, is not okay."

Not okay, and actively harmful, another student contended.

"I think clarity in itself is subjective so I don't really know what we're voting on, which is why I oppose this resolution," said another student leader. "I just don't think [the resolution] protects students in the way that it should. I think that actually really harms students."

In fact, merely proposing such a resolution—which was only intended to protect students' free expression rights—made people feel unsafe.

Let's take a look at this resolution. There's nothing in it about hurting, threatening, or harassing marginalized persons. It's just a short statement asking administrators to define their terms. The university prohibits "inappropriate language, hurtful words, sexual jokes, innuendos," and a whole host of other activities, under certain ill-defined conditions. There's an obvious confict between a stated commitment to free expression and a prohibition on inappropriate language. Left unresolved, this conflict almost certainly chills free expression.

Student Jake Goldberg, who authored the resolution, told The College Fix he was frustrated but would continue advocating free speech at Tufts.