Likely to lower its expected rate of returns on investments, forcing cities and other participating agencies to contribute more to cover the shortfall. 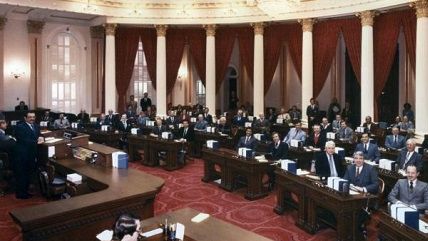 There's bad news coming down the pike for California municipalities following several days of board meetings for the nation's largest state-based pension fund. Although no action has been taken, it's clear the California Public Employees' Retirement System, or CalPERS, might again lower its expected rate of returns on investments. That means cities and other member agencies would have to pay more to make up the shortfall.

A key moment, buried amid nearly 13 hours of recorded meetings, came when CalPERS' Chief Investment Officer Ted Eliopoulos played a short interview video with Wall Street experts, including famed investor Warren Buffett, opining on the expected investment returns in coming years. One investment guru thought a 4 percent or 5 percent rate of return would be the objective. Buffett pointed to very slow growth in the economy.

Eliopoulos used a diagram showing a 30-year decline in interest rates, even as discount rates used by pension funds remained steady. CalPERS currently calculates its pension liabilities based on an expected return rate of 7.5 percent. Based on the data provided by CalPERS staff, it's clear the agency would need to ramp up its risk taking to have any chance to continually meet such goals. In the past year, CalPERS' return rate was 0.6 percent.

Longtime pension-reform advocate Daniel Pellissier, president of California Pension Reform in Sacramento, praised the CalPERS staff for its bout of truth telling, given that such predictions are not what the current system's defenders want to hear. "I'd like to think they actually have a conscience and they understand the role they play," he said. "What do you do when you're facing flat returns for years ahead and liabilities are rising?"

The staff is "pushing the board to do the right thing," Pellissier added. "Some board members are essentially saying to staff: Make me do the right thing." The "right thing," in Pellissier's view, is to further reduce the expected return rates to more closely match market performance. He compares the situation to 1999, when CalPERS officials did not sound the alarm bells about the looming costs that would follow SB400, the law that led to 15 years of statewide retroactive pension increases and that still plagues the system to this day.

At least one CalPERS board member complained about the cost of reducing the discount rate. There's no doubt that doing so means that California cities will face costly spikes in their payments. But in reality, the costs are already there. State and local governments have already made pension promises to public employees. The courts have consistently enforced the so-called "California Rule," which stops agencies from lowering benefits for current employees, even going forward.

The question, according to reformers like Pellissier, is how forthright state officials will be in accounting for the size of the pension-related debt. Few dispute the essential point: Governments have undercharged municipalities for the cost of pension benefits, possibly for decades. They have to keep those promises. The "unfunded pension liability" is essentially the debt – the difference between what's promised and the available funds.

In the private sector, employees typically receive defined-contribution plans, generally 401(k)-style benefits. The employee contributes a certain percentage into a fund. Sometimes the employer matches a portion of the contribution. The money is invested in mutual funds. When the market does well, the employee reaps the benefits. When it does poorly, the employee endures the downside. The employee uses whatever is in the fund for retirement. There are no "liabilities."

The government pension plans that CalPERS manages are an entirely different animal. Agencies make benefit promises to employees based on a formula. For instance, most public-safety officials (police, fire, prison guards) in California receive "3 percent at 50." That means they retire with 3 percent of their final years' pay times the number of years worked, available at age 50 – plus myriad pension "enhancements" added at the end of the career. That level — 90 percent or more of final pay — is guaranteed, no matter what.

This explains the heated debate over investment-return predictions. If the market does well, there are fewer forecast debts. If it does poorly, those liabilities soar. Because taxpayers are pledged to backfill any shortfalls, it's a highly political issue. Additionally, critics note that the CalPERS board is dominated by union officials whose members benefit from painting as rosy a scenario as possible about the future investment performance.

Union officials argue the system is fine and that, despite recent poor performance, CalPERS does well over time. Returns have been terrible since 2014, but outperformed predictions between 2009 and 2013. But even the CalPERS staff's presentation suggests it's unrealistic to bank on continuing 7.5 percent return rates in the current market.

As Pensions & Investments reported, "Andrew Junkin, president of Wilshire Consulting, the pension fund's general investment consultant, told the committee its firm estimates the pension fund's annualized investment return over the next decade will be 6.2 percent, down 90 basis points from the 10-year forecast Wilshire made a year ago of 7.1 percent." The publication noted that CalPERS could vote on a rate reduction in February.

Pension-reform advocates aren't the only ones raising the ghost of SB400 in the current context. "It's time to put SB400, the 1999 California legislation that changed benefits for public workers, behind us," argued CalPERS board members Richard Costigan, Dana Hollinger and Bill Slaton in a September column. "That bill … was a product of its time. Retirement security is too important today to get caught in a debate about the past. When SB400 became law, CalPERS was 137 percent funded."

They vowed to examine the situation in light of the current, tougher economic climate. The staff presentation at the recent Board of Administration meetings suggest those words were more than public relations. Top CalPERS officials seem to recognize the size of the looming problem. The real test will come in December committee meetings and at the next board confab. But it's increasingly likely that return predictions are headed downward.

This column first appeared in Calwatchdog.