How Much Do We Still Need to Care if a Potential Cabinet Member Is Anti-Gay?

Possible new health secretary not a fan of LGBT rights. Does it matter? 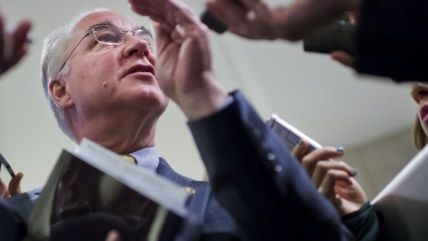 Georgia Republican Rep. Tom Price is being floated as one of President-Elect Donald Trump's likely picks to serve as secretary of Health and Human Services. It shouldn't come as a surprise (at least for people who know who Price is). Price, current head of the House Budget Committee, is a doctor and huge opponent of the Affordable Care Act as it exists.

But Price is more than just somebody who doesn't like Obamacare—he's one of the Republicans responsible for actually putting together a substantive plan for reforms. Peter Suderman analyzed Price's ideas to repeal and replace Obamacare in a 2014 issue of Reason magazine.

Price is also extremely conservative in just about every way—including holding socially conservative views opposing gay marriage and gay rights laws. Price regularly scores a zero on the Human Rights Campaign's scorecard evaluating legislators' votes on LGBT issues. He put out a statement after the Supreme Court mandated government recognition of same-sex marriages as "legislating from the bench" and "a sad day for marriage." He has previously supported a constitutional amendment defining marriage as being between one man and one woman.

So his history of comments on LGBT issues has popped up on gay blogs and sites as a source of concern. But would his positions opposing gay marriage actually mean anything in office? Legal recognition is a settled matter. It seems unlikely he would be able to implement policies that, for example, assist families headed by a heterosexual couple but not gay ones.

There is a quote from 2013 people are noticing that could be instructive. Price is no fan of LGBT folks, but he's also clearly a policy wonk. When asked by an antigay rabbi about whether the legislature should take into account the "health impact and economic impact" of "promoting" homosexuality, abortion, or pornography, he responded:

The consequences of activity that has been seen as outside the norm are real and must be explored completely and in their entirety prior to moving forward with any social legislation that would alter things. I'm always struck by people who wake up one morning and think that they've got a grand new way of doing something when as you all know that the tried and true traditions in history that made us great are preserved and have survived because they are effective. I hear you, medical health and costs; you talk about a huge cost-driver to state pensions and other things, many of these areas would significantly alter state balance sheets.

But as for his concerns about the cost impact to state pensions and balances, I can only assume he's talking about what happens to benefits when states are legally required to recognize same-sex partners as beneficiaries. In that case, let's suggest that if it's too costly to treat couples equally under the law for these benefits, the problem then lies in the benefits themselves, not with equality. Given Price's interest in cost controls and reducing government spending, maybe that's something he should think about.

There will likely be fights between the LGBT and a Price-run HHS in issues raging from whether transgender people can have treatments covered, access to the latest medicines that are showing to be increasingly successful in preventing the spread of HIV, and even the unending debate over how much to teach children about sexuality and/or abstinence.

If anything, these examples show the problem with the government having so much control over what we do with our own bodies and how we do it. If we want government out of our bedrooms, we also need to stop demanding the government get involved in our bedroom-related matters in the first place. If access to important treatments and medicine is dependent on having a friendly face in a top cabinet position, maybe we should be rethinking what that agency is doing entirely.