America Called Bullshit on the Cult of Clinton

The one good thing about Trump's win? It shows a willingness among Americans to blaspheme against saints and reject the religion of hollow progressiveness. 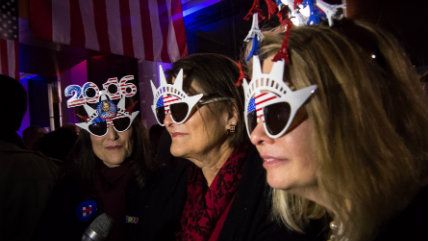 If you want to see politics based on emotionalism over reason and a borderline-religious devotion to an iconic figure, forget the Trump Army; look instead to the Cult of Clinton.

Ever since Donald Trump won the presidential election, all eyes, and wringing hands, have been on the white blob who voted for him. These "loud, illiterate and credulous people," as a sap at Salon brands them, think on an "emotional level." Bill Moyers warned that ours is a "dark age of unreason," in which "low information" folks are lining up behind "The Trump Emotion Machine." Andrew Sullivan said Trump supporters relate to him as a "cult leader fused with the idea of the nation."

What's funny about this is not simply that it's the biggest chattering-class hissy fit of the 21st century so far — and chattering-class hissy fits are always funny. It's that whatever you think of Trump (I'm not a fan) or his supporters (I think they're mostly normal, good people), the fact is they've got nothing on the Clinton cult when it comes to creepy, pious worship of a politician.

By the Cult of Hillary Clinton, I don't mean the nearly 62 million Americans who voted for her. I have not one doubt that they are as mixed and normal a bag of people as the Trumpites are. No, I mean the Hillary machine—the celebs and activists and hacks who were so devoted to getting her elected and who have spent the past week sobbing and moaning over her loss. These people exhibit cult-like behavior far more than any Trump cheerer I've come across.

Trump supporters view their man as a leader "fused with the idea of the nation"? Perhaps some do, but at least they don't see him as "light itself." That's how Clinton was described in the subhead of a piece for Lena Dunham's Lenny Letter. "Maybe [Clinton] is more than a president," gushed writer Virginia Heffernan. "Maybe she is an idea, a world-historical heroine, light itself," Nothing this nutty has been said by any of Trump's media fanboys.

"Hillary is Athena," Heffernan continued, adding that "Hillary did everything right in this campaign… She cannot be faulted, criticized, or analyzed for even one more second."

That's a key cry of the Cult of Hillary (as it is among followers of L. Ron Hubbard or devotees of Christ): our gal is beyond criticism, beyond the sober and technical analysis of mere humans. Michael Moore, in his movie Trumpland, looked out at his audience and, with voice breaking, said: "Maybe Hillary could be our Pope Francis."

Or consider Kate McKinnon's post-election opening bit on SNL, in which she played Clinton as a pantsuited angel at a piano singing Leonard Cohen's "Hallelujah," her voice almost cracking as she sang: "I told the truth, I didn't come to fool ya." Just imagine if some right-leaning Christian celeb (are there any?) had dolled up as Trump-as-godhead and sang praises to him. It would have been the source of East Coast mirth for years to come. But SNL's Hallelujah for Hillary was seen as perfectly normal.

As with all saints and prophets, all human manifestations of light itself, the problem is never with them, but with us. We mortals are not worthy of Hillary. "Hillary didn't fail us, we failed her," asserted a writer for the Guardian. The press, and by extension the rest of us, "crucified her," claimed someone at Bustle. We always do that to messiahs, assholes that we are.

And of course the light of Hillary had to be guarded against blasphemy. Truly did the Cult of Hillary seek to put her beyond "analysis for even one more second." All that stuff about her emails and Libya was pseudo-scandal, inventions of her aspiring slayers, they told us again and again and again.

As Thomas Frank says, the insistence that Hillary was scandal-free had a blasphemy-deflecting feel to it. The message was that "Hillary was virtually without flaws… a peerless leader clad in saintly white… a caring benefactor of women and children." Mother Teresa in a pantsuit, basically. As a result, wrote Frank, "the act of opening a newspaper started to feel like tuning in to a Cold War propaganda station."

Then there was the reaction to Clinton's loss. It just wasn't normal chattering-class behavior. Of course we expect weeping, wailing videos from the likes of Miley Cyrus and Perez Hilton about how Clinton had been robbed of her moment of glory; that's what celebs do these days. But in the media, too, there was hysteria.

"'I feel hated,' I tell my husband, sobbing in front of the TV in my yoga pants and Hillary sweatshirt, holding my bare neck," said a feminist in the Guardian. Crying was a major theme. A British feminist recalled all the "Clinton-related crying" she had done: "I've cried at the pantsuit flashmob, your Saturday Night Live appearance, and sometimes just while watching the debates." (Wonder if she cried over the women killed as a result of Hillary's machinations in Libya? Probably not. In the mind of the Hillary cultists, that didn't happen—it is utterly spurious, a blasphemy.)

Then there was Lena Dunham, who came out in hives—actual hives—when she heard Clinton had lost. Her party dress "felt tight and itchy." She "ached in the places that make me a woman." I understand being upset and angry at your candidate's loss, but this is something different; this is what happens, not when a politician does badly, but when your savior, your Athena, "light itself," is extinguished. The grief is understandable only in the context of the apocalyptic faith they had put in Hillary. Not since Princess Diana kicked the bucket can I remember such a strange, misplaced belief in one woman, and such a weird, post-modern response to someone's demise (and Clinton isn't even dead! She just lost!).

It's all incredibly revealing. What it points to is a mainstream, Democratic left that is so bereft of ideas and so disconnected from everyday people that it ends up pursuing an utterly substance-free politics of emotion and feeling and doesn't even realize it's doing it. They are good, everyone else is bad; they are light itself, everyone else is darkness; and so no self-awareness can exist and no self-criticism can be entertained. Not for even one second, in Heffernan's words. The Cult of Hillary Clinton is the clearest manifestation yet of the 21st-century problem of life in the political echo chamber.

Mercifully, some mea culpas are now emerging. Some, though not enough, realize that Hillaryites behaved rashly and with unreason. In a brilliant piece titled "The unbearable smugness of the liberal media," Will Rahn recounts how the media allowed itself to become the earthly instrument of Clinton's cause, obsessed with finding out how to make Middle Americans "stop worshiping their false god and accept our gospel."

Indeed. And the failure to make the gospel of Hillary into the actual book of America points to the one good thing about Trump's victory: a willingness among ordinary people to blaspheme against saints, to reject phony saviors, and to sniff at the new secular religion of hollow progressiveness. The liberal political and media establishment offered the little people a supposedly flawless, Francis-like figure of uncommon goodness, and the little people called bullshit on it. That is epic and beautiful, even if nothing else in recent weeks has been.