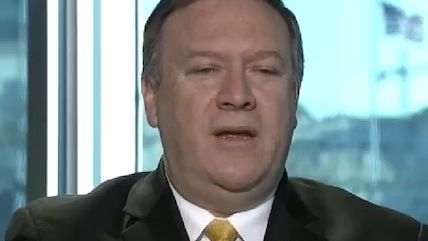 Trump has reportedly picked Rep. Mike Pompeo (R-Kan.) to run the Central Intelligence Agency. Would sort of CIA director would Mike Pompeo be?

Well, for one thing, he thinks Edward Snowden should be executed:

That's Pompeo speaking on C-Span's Washington Journal this past February. (You can watch the full appearance here.) His comments came in the midst of a discussion of Hillary Clinton's emails and the Benghazi scandal. Here is a transcript of his Snowden remarks:

It's absolutely the case that we have not been able to secure all the American information that we needed to, and that we've had the traitor Edward Snowden steal that information. He should be brought back from Russia and given due process, and I think the proper outcome would be that he would be given a death sentence for having put friends of mine, friends of yours, who served in the military today, at enormous risk, because of the information he stole and then released to foreign powers.

That is, needless to say, an extremely tendentious description of what Snowden did. But many people in the intelligence world feel the same way, and—if this is indeed the president-elect's pick to run the CIA—it doesn't look like that culture will change under Trump.

Update: It's official. They're offering Pompeo the job, and he wants to take it.

(For Reason's interview with Snowden, go here. For past editions of the Friday A/V Club, go here.)