If you worry about Wall Street influence and hawkish foreign policy, the senior New York senator is very bad news. 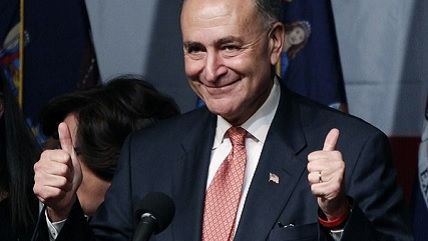 Dumb? Democrats nominating one of the most disliked politicians in America as their presidential candidate, perhaps the only opponent Donald Trump could have beaten. Dumber? The Senate Democratic caucus cluelessly anointing "I'd walk a mile for a camera" Charles Schumer as its public voice.

What. Were. Senate. Democrats. Thinking?

Where were Bernie Sanders and Elizabeth Warren, avowed enemies of the Wall Street billionaires, who apparently thought they were atoning for their absence-without-leave by joining Schumer in playing identity politics, by endorsing left-liberal, African American, Catholic-converted-to-Muslim U.S. Rep. Keith Ellison for chairman of the Democratic National Committee?

In what used to be called the greatest deliberative body in the world, were Democrats doing any serious reflection at all on the results of the recent election? Was the exclusive club of forty-eight men and women just hell-bent on ignoring the toxic crony capitalism that Sanders excoriated during his race for the 2016 nomination against Hillary Clinton?

Sure, give the Democrats a moment or three or grief over the surprise election of Donald Trump and the increasing Republican domination of statehouses around the country. But if the party of Jefferson, Jackson, and Ted Kennedy ever wants to update its agenda for the 21st century, it might start by cutting loose terrible, terrible buttinskies like Hillary Clinton and Chuck Schumer, who is so backwards, trivial, and bought-off that he once tried to regulate the price of breakfast cereal and led a successful charge to decaffeinate Four Loko. And note that when it comes to Wall Street bailouts, Schumer couldn't do enough to make sure that his fat-cat pals were made whole. As Michael notes, he's also generally terrible on foreign policy as well as economic policy and basic lifestyle issues too. From virtually any perspective (certainly from a libertarian one but also from a progressive one, too), Schumer's policies on just about everything are objectionable.

For progressive Dems such as Warren and progressive kinda-sorta Dems such as Bernie Sanders to have no problem with Schumer is a massive tell that such commitments are a distant second (at best) to party unity and tribal loyalty.

If the rancid 2016 election proved anything, it's that both the Republican and Democratic parties are stuck in various decades of the 20th century, with each group looking back fondly on different versions of elite control. And that the American people, who turned out in smaller percentages than in 2012 and couldn't decide cleanly between the two-most-hated candidates in U.S. history, are ready for something different. At this point, the Dems should be trying to chart a new direction, one that might actually put individuals and autonomy first. With the Republicans controlling the White House and Congress, the odds are fair-to-great that the Party of Lincoln will once again go on a massive, ruinous spending spree, just like they did the last time they had such power. If Democrats were smart, they would tack libertarian and pursue targeted spending that actually helped people in need while also going after crony capitalism and military buildups and wars that have failed to make the world a safer place.

Good luck with that, Dems, because if he's your idea of a party leader for a 21st century America that's still angry over bank bailouts and attempts to crush the sharing economy and get in the way of people creating new ways of living without government approval, you're going nowhere fast. Even if the Republicans—who have lost the popular vote in four of the last five presidential races and even less-liked than your party—are your opponents.