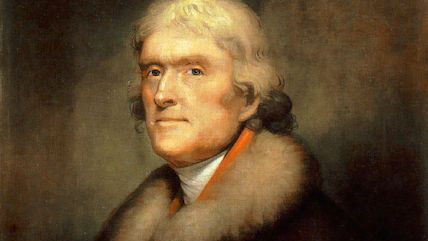 Nearly 500 members of campus signed a letter to UVA President Teresa Sullivan criticizing her for continuously including Jefferson quotes in emails—particularly in her post-election message to campus.

"For many of us, the inclusion of Jefferson quotations in these e-mails undermines the message of unity, equality and civility that you are attempting to convey," read the letter.

Jefferson owned slaves and committed atrocities "against hundreds of human beings," according to several professors who signed the letter.

"The point is that the move that says, he owned slaves, but he was a great man, is deeply problematic, and I think it will continue to prevent us from being the kind of inclusive, respectful community that President Sullivan and the rest of us envision," another professor told The Cavalier Daily.

But… Jefferson did own slaves, and was also a great man. That may be problematic, but it's undeniably true. Jefferson is an important historical figure responsible for a number of praiseworthy accomplishments, and also a flawed human being who mistreated a great many individuals, in accordance with the standards of the time.

It would be easier, of course, if historical figures were always universally good or universally evil, but reality is more complicated and contradictory than that. It falls to modern students of history to recognize the virtuous deeds of people like Jefferson while also condemning barbarity.

"Quoting Jefferson [or any historical figure] does not imply an endorsement of all the social structures and beliefs of his time, such as slavery and the exclusion of women and people of color from the university," she wrote in response to the letter.

Here was the quote that had so incensed campus: in her post-election unity email, Sullivan had reminded campus that Jefferson once described UVA students as "not of ordinary significance only: they are exactly the persons who are to succeed to the government of our country, and to rule its future enmities, its friendships and fortunes."

Quoting Jefferson complimenting UVA students actually offended them? Come on. "Inclusivity" does not and cannot require UVA to toss Jefferson down the memory hole.

And yet Noelle Hurd, an assistant professor of psychology and co-author of the letter, had the audacity to suggest to The Washington Post that uncritically quoting Jefferson could create a "hostile environment." Should Jefferson's shortcomings be examined? Of course. Does failing to do that produce a "hostile environment"? Of course not. It's reckless to imply otherwise, because the Education Department's Office for Civil Rights takes hostile-environment accusations extremely seriously (more seriously than the letter of the law requires, in fact). They are the basis of a relatively new form of hurt-feelings based censorship on college campuses.

By all means, UVA should grapple with Jefferson's mixed legacy. But it's wrong to suggest that invoking him is in any way a violation of federal law.