Let's Not Have an LGBT Panic over Trump's Election

Use this opportunity to reconsider the desire to punish one's enemies. 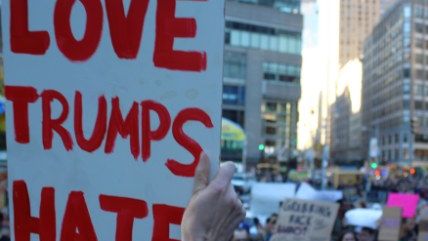 Because President-Elect Donald Trump has taken just about every conceivable possible position on gay and transgender issues, and because these LGBT issues played almost no role in how the election turned out, I've been reluctant to even speculate what might happen in a Trump administration.

Others have been much less circumspect and are certain that Trump is going to be a disaster for LGBT issues. History suggests they would be saying that regardless of who the Republican nominee was, so it's helpful to recognize that this freakout would have happened if it had been Jeb Bush, Marco Rubio, or probably any of the other GOP candidates except maybe John Kasich. The Republican Party did decide to maintain and even expand an anti-gay platform prior to the election despite the opportunity to move forward.

All of this response is rather disconnected from what Trump actually has the power to accomplish when in office and what the public at large would actually stand for. Yes, Vice President-Elect Mike Pence has legitimately awful positions on gay and transgender issues, but that should not be taken as indicator of what can actually happen. After all, conservative Christians rallied voters to the polls in 2004 with the possibility of a constitutional ban on same-sex marriage recognition and that never happened or even got anywhere near where it was even a possibility. It did influence several state-level gay marriage bans.

Fear was used to keep the LGBT vote strongly directed toward the Democrats. Clinton lost, but the fear remains, even though it's tied to not a whole lot but rhetoric.

Walter Olson, Cato senior fellow and Reason contributing editor, took to the New York Post to actually analyze what's likely to happen under Trump and came away concluding that as president, he won't be rolling back gay rights. But LGBT groups may not succeed in pushing for even more federal oversight over private treatment of gay and transgender issues.

Gay marriage recognition is safe (Trump said on 60 Minutes that he has no interest in trying to relitigate that fight). There's going to be no effort to reinstitute a ban on military service. But there's a couple of issues that Olson points out where I agree and would like to flesh out a little bit. Quoting Olson:

Right before the election, the Supreme Court agreed to hear the case of a transgender teen fighting with a Virginia school board over the Department of Education's rule-making that schools must accommodate his request to use male facilities at school. The case, though, could end up really being about the process of federal rule-making and could avoid answering the actual question of whether the Obama administration's interpretation of the law is correct.

The court could rule that the administration didn't properly implement policies, and then it could be up to the Trump administration to decide what to do next. But the worst-case scenario here would be that they decide not to try again to implement this federal policy and leave it to the states (Trump sort of flip-flopped on North Carolina's law after April and subsequently wanted to leave it to them to decide). That doesn't necessarily mean that transgender people are screwed over. It just means other people will be making the decisions.

What does that future mean? Let's look back at North Carolina. Gov. Pat McCrory, a Republican, signed and defended HB2, the law that requires (among other things) that transgender school students use the facilities that match their birth certificates. North Carolina voters may have just bounced him from office in favor of a Democratic rival who refuses to defend the law. The election is extremely close, and McCrory is refusing to concede at the moment. Given how successful Republicans were otherwise in this election, the possibility of McCrory losing is an important cultural sign of how people are viewing this issue. It's not necessarily the case that LGBT folks can't get wins outside of the federal government. Not turning to the federal government to fix every LGBT injustice doesn't necessarily mean there's no other way to deal with bigotry.

Trump and a Republican Congress also likely dooms the Equality Act, a bill that would formally add sexual orientation and gender identity to all federal antidiscrimination laws. But the bill is actually much broader than that, drastically expanding the federal government's definition of a public accommodation to cover nearly every consumer-oriented business in this country. This would have resulted in a massive increase in the ability of the Department of Justice to get involved in local accusations of business discrimination in all protected categories, even in cases where state laws already had it covered.

To me, it's remarkable that there are folks out there who are terrified at the level of power Trump will have once he takes control of the executive branch who are also upset at the possibility that this law that expands the power of the executive branch will not pass. Trump critics (rightfully) see him as a man with a tendency to punish his enemies. And yet, there's a serious desire to "punish" businesses and charities who are not on board with gay issues and are calling this "justice." This is what Olson is alluding to when he suggests that LGBT activists will not be willing to compromise on religious freedom issues. Some people cheered at the prospect of government officials punishing florists and bakers and photographers for not serving gay couples.

When you decide that it's moral and righteous to use the government to punish your enemies, then what happens when your enemies get themselves elected into power? It's not entirely clear whether a backlash against public accommodation law over-enforcement contributed to the anti-PC animus driving this election, but it seems possible.

Rather than panicking about having a federal agenda subverted, maybe the LGBT needs to stop and really think about what they're trying to accomplish. Why is it so important that bakers and florists be punished if they don't serve gay couples? Why are people trying to go after religious colleges and churches?

If the backlash to people feeling as though they're being threatened by the government because of their beliefs results in the election of an erratic authoritarian like Trump, it's time to take a step back and evaluate goals. If LGBT leaders are worried about federal authority being used to punish the community, don't support laws and regulations that normalize federal punishment toward others.