Kellyanne Conway says Trump's critics should be "very careful" about dissing him "in a legal sense." 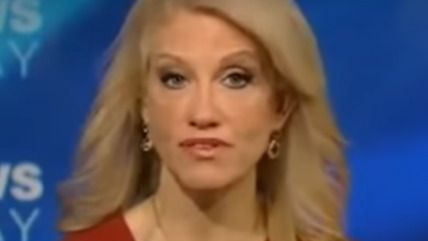 Given Donald Trump's well-earned reputation as a thin-skinned bully, it is sadly unsurprising that the president-elect's campaign manager would threaten to sue a political opponent for dissing the blowhard billionaire. That is what Kellyanne Conway seemed to do when she appeared on Fox News Sunday yesterday, even while denying any such intent.

Conway was reacting to an overwrought press release in which Senate Minority Leader Harry Reid (D-Nev.) bemoaned Trump's victory, saying it "has emboldened the forces of hate and bigotry in America." In the part of Reid's statement that Fox News Sunday host Chris Wallace read to Conway, the retiring senator called Trump "a sexual predator who lost the popular vote and fueled his campaign with bigotry and hate." Here is the relevant part of Conway's response (emphasis added):

I find Harry Reid's public comments and insults about Donald Trump and other Republicans to be beyond the pale. They're incredibly disappointing. Talk about not wanting my children to listen to somebody.

By "characterizing somebody in a legal sense," Conway, who has a degree from George Washington University Law School and taught there for four years, clearly was referring to the epithet "sexual predator," which arguably implies that Trump is a criminal. Falsely accusing a person of a crime is considered libel per se, meaning that if Trump could prove that someone did so with "actual malice," he would not also have to prove that the statement injured him. One of Trump's lawyers made precisely that argument when he threatened to sue The New York Times for reporting the allegations of women who say he kissed or groped them without their consent.

The implication was not lost on Wallace. "When you say 'in a legal sense,'" he asked Conway, "are you suggesting that Donald Trump might sue Harry Reid?" Perhaps realizing how ridiculous that would seem, Conway backtracked. "No, I'm not suggesting that at all," she said. "I'm calling for responsibility and maturity and decency [from] somebody who has held one of the highest positions in our government."

Reid's office immediately capitalized on Conway's veiled threat. "It only took five days for President-elect Trump to try to silence his critics with the threat of legal action," Reid spokesman Adam Jentleson said in a statement on Sunday. "This should shock and concern all Americans. Trump has always used threats and intimidation to silence his critics. Now he wants to silence a discussion of the acts of hate and threats of violence being committed in his name across the country. Silencing this discussion normalizes hate and intimidates the victims."

Reid is an awful hack, and his claims about a post-election hate crime wave are dubious at best. Yet by responding to his invective with a Trumpesque intimation of litigation, Conway managed to make him look like a brave truth teller.