Democrats Have No One to Blame but Themselves for Trump 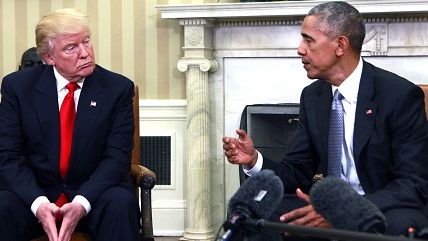 Though in many ways the 2016 presidential contest was an uprising against the establishment, let's face it; Republicans weren't punished. And that's not a new development. 2016 is the fourth consecutive election in which the GOP has won the Senate and House. Nearly every conventional conservative Senate candidate—the ones Donald Trump's fans supposedly hate—ran ahead of the GOP presidential nominee. This includes Republicans who were reticent supporters or outright critics of Trump's.

A melodramatic Van Jones is free to claim that Trump's victory is a "white-lash." But ever since Barack Obama's unprecedented passage of Obamacare, his party has lost more than 1,000 seats nationally in three wave elections. Since 2010, the electorate has demanded that Washington share power, but the president didn't listen, relying on executive power, bureaucracy and the judiciary to pass agenda items without consensus or compromise.

In all their vast coverage of agitated right-wingers, it may have escaped the attention of many in the media that over the past eight years, the Democratic Party has moved dramatically to the left on an array of issues. It's now a party of cultural imperialists and economic technocrats who want to rule through fiat. It is a party more comfortable coercing Americans who see the world differently than convincing them. It is a movement propelled by liberal pundits who have stopped debating and resorted to smearing millions they disagree with.

Obama might be capable of governing this way and remaining popular, but his political talents aren't transferable—not to House or Senate Democrats, who have been paying for his policies, and certainly not to Hillary Clinton. Democrats nominated a corrupt candidate with abysmal political instincts, a decades long habit of mendacity and a dearth of new ideas.

The Democratic Party establishment never entertained any other nominee seriously, and the liberal punditry never earnestly lamented Clinton's inadequacies. There was never any question that all the money, power and infrastructure of the left would mobilize behind Clinton.

Democrats nominated one of the least trusted people to ever run for the presidency. According to the final Washington Post-ABC News tracking poll, Americans trusted Clinton 6 points less than they did Trump, whose absurdities and outright fabrications probably came off as straight talk to millions of Americans sick of hearing manicured talking points. An Associated Press-GfK poll also found that 92 percent of Americans thought Clinton's email setup either broke the law or was in "poor judgment." Only 6 percent believed she did nothing wrong.

Trump may also have been the beneficiary of decades of vacuous liberal attacks on Republican candidates, all of whom have supposedly been racist and misogynist. Voters may be becoming increasingly immune to these histrionics. Yet as soon as it became apparent that Trump would win, liberal commentators began blaming bigotry again. The left has become so saturated in identity politics that it can't imagine that anything else might drive a voter.

Beltway types—and I include myself in this objectionable group—take everything politicians say seriously and literally, because we sort of have to. There is value in parsing policy, ideology and rhetoric, but it has limited significance in a nonpolitical world. Voters don't care if every utterance is fact-checkable when they have intuition and experience to guide them. They are far less horrified by every gaffe than the average reporter.

I recently visited my middle/working-class hometown in suburban New York. Not exactly Factoryville, Ohio, or rural Mississippi, it was still more typical of the average American life than many people realize. It's a place where families, though not destitute, often struggle with excessive property taxes, mortgage payments, subpar schools and rising health care bills.

None of the Trump voters who surrounded me—most of whom I'd consider moderate Republicans—argued that the GOP nominee is an exemplary person or that he was an optimal candidate for the presidency. Their support had nothing to do with white patriarchal supremacy or any of the ugly themes that preoccupy the progressive left (and now the entire Democratic Party).

Certainly, none of these voters cared for the reasons I was opposing a Trump presidency, either—which, broadly speaking, would be the preservation of constitutional processes and the expansion of free trade. The consensus solidified around one thought: Clinton was worse. A lot worse. She was a corrupt, power-hungry would-be dictator who needed to be kept out of the White House.

Because they were so convinced Trump was going to win, I sort of felt sorry when anticipating their disappointment—not only because I personally disliked many of Trump's positions and the thought of one-party rule but also because nothing I read or saw from the experts pointed to a GOP victory. The joke, of course, was on me.