A Resounding Vote Against Due Process and the Second Amendment 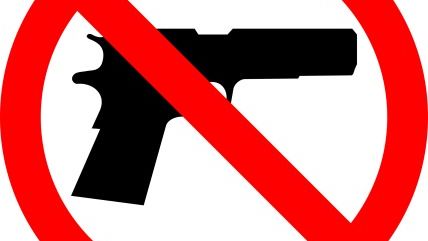 Like a California law that took effect last January, the gun control initiative that Washington voters overwhelmingly approved on Tuesday authorizes court orders that deprive people of the right to arms without due process. In fact, Initiative 1491, which was backed by Gov. Jay Inslee and attracted support from 71 percent of voters, is even less respectful of due process and the Second Amendment.

Both laws allow police officers and other concerned, meddlesome, or possibly malicious individuals to ask a judge for a "gun violence restraining order" (in California) or an "extreme risk protection order" (in Washington), which prohibits its target from buying or possessing firearms and requires him to surrender any he already owns. In California, orders can be requested by "immediate family member[s]," a category that includes spouses, domestic partners, current or former roommates, parents, step-parents, parents-in-law, grandparents, step-grandparents, siblings, step-siblings, siblings-in-law, children, stepchildren, children-in-law, and grandchildren. The authors of Initiative 1491 thought that list was not long enough, so they added "dating partners," baby mamas (or papas), former legal guardians, and all relatives, including aunts, uncles, and cousins. They also extended the deadline for a former roommate (which could be an ex-spouse or ex-lover) seeking an order from six months after moving out to a year.

Both laws allow judges to issue temporary orders that disarm people without giving them notice or a chance to object. In California, where temporary orders last up to three weeks, petitioners who are not police officers are required to show a "substantial likelihood" that "the subject of the petition poses a significant danger, in the near future, of personal injury to himself, herself, or another." In Washington, where temporary orders last up to two weeks (the one way in which Washington's law is less objectionable), the petitioner has to show "reasonable cause to believe that the respondent poses a significant danger of causing personal injury to self or others in the near future."

Washington's law is less demanding than California's in its requirements for a one-year order, which can be issued after a hearing at which the respondent finally gets a chance to oppose the petition. In California the petitioner has to show by "clear and convincing evidence" that the respondent "poses a significant danger of personal injury" to himself or others. In Washington the petitioner has to show "by a preponderance of the evidence that the respondent poses a significant danger of causing personal injury to self or others." Preponderance of the evidence, which amounts to any probability greater than 50 percent, is a significantly lighter burden of proof than clear and convincing evidence, which means a claim is "highly and substantially more probable to be true than not." In this case, the claim is that the respondent "poses a signficant danger," a phrase Initiative 1491 does not define. Whatever probability of harm amounts to "a significant danger," the preponderance-of-the-evidence standard effectively cuts it in half. So if a 10 percent risk is significant, a person can lose his Second Amendment rights even if there is a 95 percent probability that he will never use a gun to harm himself or anyone else.

Legal judgments are rarely so precise, of course. But by combining a vague criterion ("significant danger") with a light burden of proof (preponderance of the evidence), Initiative 1491 gives judges license to do what they probably will be inclined to do when confronted by a worried or frightened petitioner: err on the side of what seems to be caution by issuing the order, even if the respondent in all likelihood poses no real threat to himself or anyone else. And once someone loses his Second Amendment rights, that fact makes a decision about whether to lift an order or let it expire even easier.

In theory, the target of an order can get it terminated if he can show by a preponderance of the evidence that he no longer poses a significant threat. But as the ACLU of Washington dryly notes, "It is unclear how persons would prove their lack of danger." In any case, a judge has little incentive to lift an order or let it expire when the person it names already has been deemed dangerous. Why take the chance? Hence someone can lose his right to keep and bear arms indefinitely based on little more than the sincere but unjustified fears of people close to him or the false testimony of a vengeful ex-girlfriend, brother-in-law, or third cousin.

The readiness of voters to approve a law that makes it so easy to take away someone's constitutional rights reflects the same disturbing tendencies that underlie popular support for banning gun ownership by people on the federal government's watch lists (a policy that Donald Trump favors despite his eager lip service to the Second Amendment). Supporters of these measures assume suspects are guilty and discount the importance of the right to arms—a combination that should alarm people on the left and the right yet somehow unites them in a bipartisan attack on civil liberties.

[This post has been corrected to clarify the standard for an ex parte, two-week order in Washington.]