Rand Paul Wins, and That's Important No Matter Who Else Wins Tonight

Non-interventionism needs a voice in 2017 and beyond. 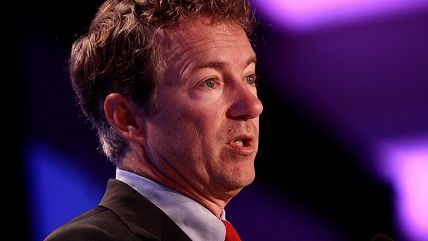 Rand Paul has won his re-election bid in Kentucky and will be returning to the Senate next year. Paul made a failed bid for the Republican nomination for president, dropping out after poor showings in Iowa and New Hampshire, and in May said he'd honor his pledge and endorse the Republican nominee Donald Trump.

Given Hillary Clinton's severe interventionist bent and Donald Trump's erratic grasp on foreign policy, Paul is set to be able to make a real difference on U.S. foreign policy in the next four years. But it depends on which Paul shows up. As I wrote last April, Paul's effort at the start of his presidential campaign to inch closer to the establishment Republican view on foreign policy would make it harder for him to distinguish himself and could doom his campaign. While Paul called arming Syrian rebels a mistake in 2014, he called for arming Kurdish rebels in Syria.

While Barack Obama was perceived by some as a more dovish candidate in 2008, his administration has helped cement much of George W. Bush and his administration's foreign policy outlook, sans the partisan bickering. In the last six years, Paul has been an important force in the Senate to try to hold President Obama accountable and shift U.S. foreign and war on terror policy in a less interventionist and bellicose direction.

Obama campaigned in 2008 on a promise to end the Iraq war, then tried to keep U.S. troops in the country past the negotiated withdrawal date, before running for re-election in 2012 on the boast that he had ended the Iraq war. By 2014, in response to fears about the Islamic State (ISIS), he was pointing out that he had tried to keep troops in Iraq. Today, U.S. troops are back in Iraq, battling ISIS. Paul campaigned for re-election this year calling on the Congress to reassert its declaration of war powers, has tried to pass legislation to revoke the post-9/11 2001 authorization of the use of military force being used by the Obama administration to wage wars against entities whose members were often just children when 9/11 happened.

The Obama administration spent years waging a counterterrorist campaign in Yemen—one the president once touted as a model for the new war on terror—before that country descended into a civil war after rebels ousted the U.S.-backed government. Paul, with Sen. Chris Murphy (D-Ct.), introduced legislation to stop U.S. arms sales to Saudi Arabia, which has been heavily involved in the Yemen civil war.

Under President Obama, the National Security Agency (NSA) and other elements of the U.S. intelligence community have continued to spy on and collect massive amounts of information about countless Americans. Edward Snowden's 2013 disclosures made it clear the U.S. surveillance state expanded under Bush continued with Obama. Paul led a 10 and a half hour filibuster last year to prevent the reauthorization of the Patriot Act, and earlier this year he worked with Sen. Ron Wyden (D-Ore.) to try to stop a new computer surveillance expansion.

Hillary Clinton has largely promised more of the same. She was one of the primary champions of the U.S.-backed intervention in the Libyan civil war, which created the space for groups like ISIS to set up shot in the country. U.S. troops are there, too, assisting the fight against ISIS. She's advocated for a no-fly zone in Syria to gain leverage against Russia, which backs Syria President Bashar Assad, who the U.S., and Clinton, insists must relinquish power. Paul has rejected that idea. If he keeps on in his pursuit of a more non-interventionist U.S. foreign policy, he could be an important challenger to Clinton in a Republican Party set to be in chaos if Trump loses.

Trump, for his part, when he's offered anything resembling clarity, has struck some non-interventionist rhetorical notes, and Paul could be in a position to force a Trump administration to actually take substantive steps at reducing U.S. military involvement overseas. Paul and other Congressional critics of the foreign policy establishment could also, whether Trump or Clinton win, push to reassert their authority in the foreign policy and war making process. The two presidential candidates' historical unfavorability ratings could make it the best opportunity in decades for Congress to do so.