How Slate and Deadspin Are Voting

There are no Trump supporters in sight, but not everyone backs Clinton. 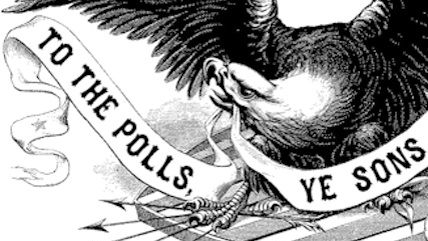 Two more publications have revealed how their staffers plan to vote: Slate, which has been showing its ballots since 2000, and Deadspin, which joined in this year. That brings the number of outlets that do this—or at least the number I'm aware of—to four. (Here at Reason we published our quadrennial voting forum last month. The American Conservative posted its participants' preferences last week.)

No one familiar with Slate will be surprised to hear that Hillary Clinton is the overwhelming favorite over there. Only two Slaters dissented: Evan Urquhart is voting for the Green Party's Jill Stein, and Rachael Larimore is writing in Evan McMullin. (There are also three nonvoters. They're sitting it out for the Slatest possible reason: They're Canadian.) Slate broke up the monotony a bit by also asking about how people voted in the primary. Clinton won there too, but not quite as overwhelmingly: Nine backed Bernie Sanders and three were for John Kasich, with varying levels of sincerity. Here is John Swansburg's explanation for his Kasich vote:

In 2008, I felt the Democratic Party had two strong candidates in Barack Obama and Hillary Clinton, so before the New York primary I registered as a Republican simply for the joy of voting against Rudolph Giuliani. (I voted for John McCain.) Having lived my entire voting life in solidly blue states, this vote against Giuliani remains my greatest contribution to American democracy, one that has been further burnished by Giuliani's horrid role in the 2016 campaign as Donald Trump's hype man. I never bothered switching my party affiliation after 2008, mainly because I enjoy the quizzical looks I get from Park Slope poll workers when I tell them I'm a Republican. This year, however, my quadrennial meddling in the affairs of the GOP left me in a bit of a pickle when primary day came around. The New York ballot I was issued did not allow for a write-in candidate, so I was forced to hold my nose and cast a vote for John Kasich, a man I hold in no regard but who felt like the closest thing to a Donald Trump protest vote. (It was between Kasich and a meaningless vote for a zombie Jeb Bush.)

Deadspin, meanwhile, leads off its forum with Drew Magary's brief comment: "I am voting for Clinton, which makes me the most conservative staffer on this goddamn site." Second is Billy Haisley: "Voting's for squares." And that pretty much sums it up: The staff is divided between Clinton and Nobody, with one Clintonite stressing that he'll be voting for her on the Working Families line rather than as a Democrat. (If you don't know what that means, read this.) One man, Kevin Draper, says he's heading to the polls to vote for D.C. statehood; in the presidential race he'll "write in Piggy Poop Balls or something."

Bonus link: At the risk of bringing show-us-your-votes into too-much-information territory, here's a rundown of my preferences in presidential races going back to when I was a toddler. That account stops in 2012, so for the record: This year I have continued my habit of voting for the lesser evil, by which I mean the Libertarian Party.