Newark Considers Crackdown on Giving Food to the Homeless

Not fair to homeless that their food isn't "scrutinized," one councilman explained. 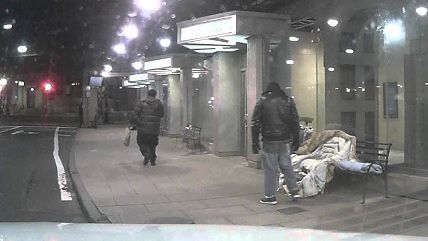 Authorities in Newark, N.J., want to start enforcing a 50 year old rule requiring a permit for the distribution of food products, according to The Star-Ledger. The move appears to be an effort to discourage the homeless from congregating around Newark Penn Station, the main train station in the city.

East Ward Councilman Augosto Amador said residents he represents, who live near the station, have complained about the homeless population.

"I find it ironic that, whenever we have a special event, street fair or festival, the vendors that handle food are required to come to the city and follow the guidelines," Amador said, according to The Star-Ledger. "However, when a church or agency decides to feed the homeless, the guidelines are not followed."

The city health department appears to be on board. "We have shared concerns for the safety and quality of the food that is being provided," the department director told The Star Ledger, "as well as the process by which it is delivered."

Another council member, the Central Ward's Gayle Chaneyfield Jenkins, suggested people could be trying to harm the homeless. "Somebody could come down and poison a bunch of people under the auspices of giving away food," she said, according to The Star Ledger. "Every good deed is not in this day and age, with all the hate we see going on."

Jenkins offered no evidence. There have been no media reports of any homeless person being poisoned by anyone masquerading as a Good Samaritan. Jenkins, on the other hand, previously came under scrutiny for charging $8,000 worth of meals to the city in one year alone, as well as owing $100,000 in back taxes. She also spent $3,000 of city taxpayer money to attend a film festival in Florida, and $1,000 for custom-made Mother's Day cards. Newark city council members are among the best paid in the state, with a salary of $85,000 in 2012 plus various perks.

The homeless, as The Star-Ledger reports, don't seem to mind the free food. "I think the food is just as warm as the hands that reach out to give it to us," one homeless man told The Star Ledger. Some volunteers questioned why the city was going to require permits. "We're not making any money," one volunteer said. Another said their group wouldn't have come out if they knew they needed a permit. "We are men and women of God," Victoria Mack, a member of a Christian group that feeds the homeless in Newark, told The Star Ledger. "We want to do the right thing."

Amador has been a city councilman since 1998. Jenkins was a councilwoman from 1995 to 2006, and was elected again in 2014 despite the controversy over her use of city money and her significant back taxes. It's unclear what, if anything, they've done for the homeless since they've been in office.